I like to fancy myself as a cocktail specialist. I like to drink them. I like to make them. I like to discuss them when I am not drinking or making them.  One thing I recently noted while making my way across the city in search of something new to sip, the craft cocktail movement that is taking Dallas by storm lacks representation by the fairer sex.  There are plenty of women that can toss a gin and tonic and open a bottle of beer, but there are very few that are making the crazy good pre-Prohibition stuff.

I have enjoyed the drinks that Louise Owens makes at Windmill Lounge for years, and she is tops in her game. But trying to think of another woman that is throwing down high octane drinks with flair, and I am remiss.  That is until I ran into Trina Nishimura at Cedars Social on Lamar.

I first met Trina while she was working the many versions of the charity dinner phenomenon 48 Nights.  Trina was serving most nights, and was also working at Smoke at the Belmont in Oak Cliff.  How fortuitous to run into her at Cedars a few weeks back. I sat down and asked Trina a few questions about her and cocktails. She likes to play down the fact that she does Japanese anime voice-overs, and probably for the right tip she would happily give you a sample of that work.  Meet Trina…

CraveDFW: You are quite the enigma. Tell us a bit about where you grew up.

Trina Nishimura:  I grew up in Amarillo, Texas. My family moved there from Sacramento, California when I was three. I grew up as kind of a tomboy, my Saturdays were spent in garages tinkering with trucks and in basements listening to yet another friend’s new band butcher Freebird.

CraveDFW: You have a bit of an acting background, tell us  how that started.

Trina Nishimura:  I started doing plays and performing at the community theater at the age of nine. I actively participated in theater and forensics throughout high school and quickly figured out that I was happiest center stage. For me the bar business is similar to a stage, a nightly show that includes refreshments, though the voice acting does provide an outlet for a tad more wackiness than socially acceptable.

CraveDFW: How did you get started as a bartender?

Trina Nishimura:  While attending UNT I started bartending at the age of nineteen. In Denton, as in any college town, there are a million bars scattered around. I worked for a wonderfully supportive group of people who owned three bars in town that sat on the corner of Fry Street. All of the employees at these three bars referred to ourselves as ‘The Family.’

Working at Riprocks  I really did gain full appreciation for what a second family could be. Riprocks, as well as the other two bars in the company, took care of their employees the way they took care of their kids. That support extended into the community as well with annual Charity Crawfish boils, pot luck Thanksgiving and Christmas dinners for the college kids who couldn’t go home for the holidays, and the manager Gayla has acted as a therapist, a mother, a friend, a mentor, or a drinking buddy for countless confused and freaked out college students on the precipice of ‘the real world.’

CraveDFW: How did you make that leap from college bar to the more sophisticated scene in Dallas?

Trina Nishimura:  Now in Dallas I decided that I should probably work somewhere that had a strong female in charge, a place where I could learn more about bartending as a craft. Enter Stacy Bowers and Craft Dallas. Going through ‘Bowers Boot Camp’ was no easy feat. There was a two hour pre-shift every night which included hour long wine classes. We were all drilled and tested regularly on service and standards. I received one night of training from the then beverage director, Justin Beam, before he left the company completely.

Short staffed on managers and being the primary bartender Bowers put me in charge of certain managerial tasks and eventually promoted me to manage the pool bar at the W… at the time the F&B program in the W was operated by Craft. After a few seasons of managing what could be seen as a nightclub in bikinis I was burnt out on the idea of managing and the responsibilities and resigned myself to simply bartending in the Living Room Bar.

CraveDFW: How did you end up at Smoke?

Trina Nishimura:  When Smoke opened I was referred by Bowers and it was fantastic! I really do admire their commitment to not only the product they serve and the vendors they get it from, but also their commitment to the community. The 48 nights project (brain child of Jeffers and Zilke with a lot of work from Brent Jackson and Jessica Martin) was awesome and I am very proud to have been a part of the project. We raised over 100 thousand dollars for the Mass Care Task force in 48 nights, it was crazy and awesome.

That was kind of the spark that got me more involved in cocktails. I would read about these cocktails that seemed crazy foreign at the time and attempt to recreate them at Smoke with the ingredients available. It was during one of these trial sessions that Martensen happened to be at my bar. I attempted a Ramos Gin Fizz sans Orange Blossom Water and gave the concoction to Martensen. I later officially met him and felt immediately idiotic for having given him a wonky drink, but his laid back laugh assured me it was cool.

CraveDFW: What is it like being one of a few females making these type of drinks in Dallas? 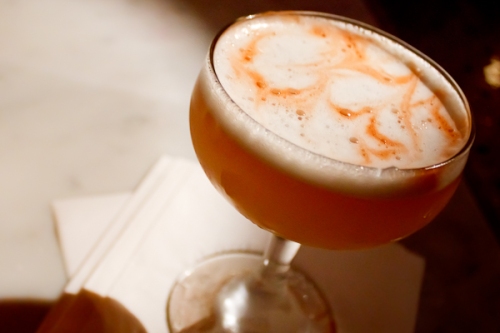 CraveDFW: What is your favorite cocktail to make?

Trina Nishimura:  My favorite cocktail is a Jack Rose, and those are pretty sparse around this city. The cocktail is mentioned a lot in my favorite novel The Sun Also Rises and I love the idea that I’m drinking something they did in the twenties!

CraveDFW: Where do you go for a drink when not at Cedars?

I frequent Bar Belmont for their cocktail and to hear one of Austin Brown’s infamous and sometimes ridiculous jokes! I love to see Andrew Lostetter at Marquee! He has been one of my dearest friends for years. Sarah Haspel at Cock and Bull has never failed to crack me up! I also adore: Lee Harvey’s, Barcadia, the Round Up is always fun, The Goat, and in the winter I love the F.O.E.

But sometimes ya just want to feel like you are home, so I am frequently found at Cedars’ bar drinking with my amazing boss Brian Williams patiently waiting to see if one of the boys can mix me a drink.