The Beignet Does Dallas

Laissez les bons temps rouler! The beignet is a humble work horse of a pastry made from pate à choux dough, made up of butter, flour, water and eggs and is also used to pipe éclairs and cream puffs. Except it’s fried. After the pastry has been fried it is covered in an inordinate amount of confectioner’s sugar to bring a smile to the diners face and cover them in the sweet white powder.

We appropriately think to New Orleans for a proper beignet, and most will associate the doughnut with Café Du Monde, who certainly goes through plenty of the pastries along with their chicory coffee. The beignet is the state donut of Louisiana.

We can still find the humble beignet in DFW, and we enjoyed a few this week with thoughts of Mardi Gras dancing in our heads. Oddfellows has a wonderfully eclectic menu that  that offers a wide assortment of dishes from fried chicken (some of the best in the city) to Asian carnitas tacos. They are also known for having incredible coffees that may be served with a side of beignets.

Without a doubt the Oddfellows version of the beignet is the most Café Du Monde-like with regards to taste, mouth feel, shape and the mounds of sugar piled high. 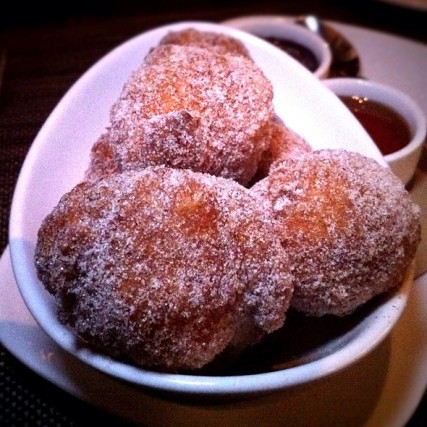 Other versions includes the sampling at Craft Dallas in the W Hotel. This has been a long time feature laced with zesty cinnamon and resembling donut holes.  The round beignet seems to be how Dallas prefers theirs as you will note in the following line.

We found the Toulouse beignet to be equally light and crisp and served with a cappuccino dipping sauce.  A single order is enough to feed at least four hungry adults awaiting their eggs Benedict or egg white omelets. Or at least it did the day we visited.

We found a similar beignet at Lombardi’s Cibus this past weekend, and it was served similarly with the cappuccino sauce. This beignet was a bit more pillowy and just as enjoyable as the Toulouse beignet. 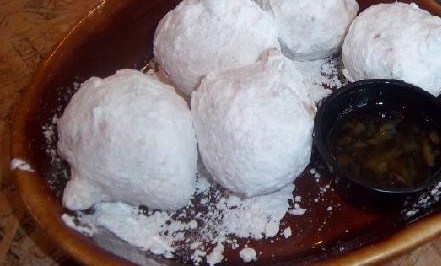 Another Broken Egg Café, a chain restaurant out of Destin, Florida includes the beignet on their menu nation wide. These are have a nice crispiness to them without emulating a donut hole. They make the wait for your sunny-side up worth waiting for. This beignet hails from the location at Casa Linda.

25 responses to “The Beignet Does Dallas”