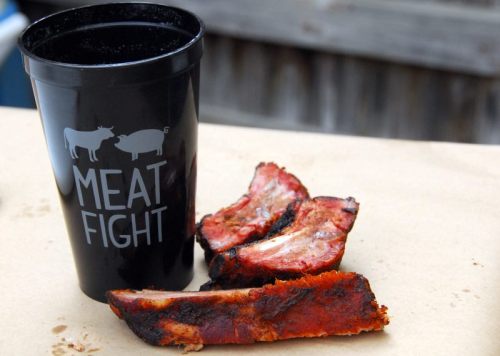 Prepare for a meaty overload of the barbecue kind, Dallas. Vegans, run for cover, this isn’t going to be pretty. Alice Laussade, The Dallas Observer’s James Beard nominated  “The Cheap Bastard” food columnist is bringing her private meat challenge public and has lined up plenty of beefy chefs to participate. Meat Fight 2012 takes place Sunday, November 4, 2012 at the Sons of Hermann Hall in Deep Ellum and should prove to be one of the more spectacular events of the year.

We sat down with Laussade for an exclusive meat-filled interview where she answered a few of our questions between bites of the gargantuan-sized beef rib from Lockhart Smokehouse.

It has been suggested you started the Meat Fight because you just wanted to eat a lot of meat. How did Meat Fight start?

That’s pretty much true. Our friend, Greg, invited us over to his house once for dinner. He served a brisket he had smoked himself, and it was my first taste of real-deal, badass brisket. It was perfect. Juicy, delicious– I finally understood why you don’t need sauce when you’re eating a really good brisket.

My husband and I were sitting around the next weekend, trying to figure out a way to get him to bring that brisket to our house for free. Because we’re jerks like that. And that’s when the competition was born. We had an annual Meat Fight in our backyard, and this year, we’re bringing the meats to the masses.

Tell us about the chef teams and how you selected them.

We just lined all the chefs in Dallas up by height and started asking the tallest ones first. The list of competitors we have this year is incredible. We’re so excited to see what they’re going to bring to the fight.

What is the charity Meat Fight will benefit and how was it selected?

Proceeds from Meat Fight will benefit the National Multiple Sclerosis Society. We have a personal connection to several people who are living with this disease. We’ve been riding bikes in the MS150 from Frisco to Fort Worth for the last three years, and it’s a cause we will continue to support in any way that we can.

Are there other Meat Fights, either foreign or domestic?

My sister hosted a Meat Fight in Australia last year at her house. Meat Fighters competed in two categories: kangaroo and lamb.

What is your favorite type of meat and how is it best prepared?

What meat or meat-like product do you refuse to eat?

I don’t refuse to eat tongue, but I don’t love it. The feeling that you’re eating something else’s mouth has never been fun to me. It’s the only meat that I’ve eaten that I’ve been like, “Oh, yeah. That’s definitely a body part.”

All three of the teams have made videos talking smack about their opponents. Who held the camera for Jack Perkins’ nude scene?

Jack said it was Chad Houser, but I didn’t confirm.

Tickets to the event are $50, with all proceeds directly benefitting the National MS Society. To purchase tickets (available starting Friday, Sept. 14) or for more information about Meat Fight, visit meatfight.com  or on Facebook (this is where you will catch the videos) and Twitter at facebook.com/meatfight and twitter.com/meat_fight.