Today marks the first anniversary of Goodfriend Beer Garden and Burger House. Goodfriend is known for their quality brews and a menu created by Jeana Johnson and Colleen O’Hare of neighboring Good 2 Go Taco which features a ration of superior burgers. Goodfriend owners Matt Tobin and Josh Yingling would like to invite you and a few hundred of your closest friends to stop by tonight from 4 p.m. to close. Expect awesome drink specials, and featured beers such as Great Divide 18, Stone 16, Real Ale Barrel Aged 15, Ommegang Independence Day 2012, Deschutes Black Butte 24, and Real Ale Scots Gone Wild.

I stopped in to chat with the guys a few days ago and enjoyed a spirited conversation on how they started the bar, update on the package store across the street and why they can’t have anything nice.

It’s no secret that this isn’t your first bar.

Matt Tobin: Yes, Vickery Park. Years ago when I lived on Goodwin I had a friend that did pretty well in the stock market, back when you could do well in the stock market. I remember he had a pool. I was working at the Dubliner as a bartender, and one night at four in the morning we were at the pool and he shouted “let’s open a bar”. A year later we had Vickery.

Shortly after we opened Vickery I hired Josh. I remember one day Josh came to me and said he didn’t want to manage anymore and was going to open his own place. I said if he wanted to open a place, then let’s go do that. 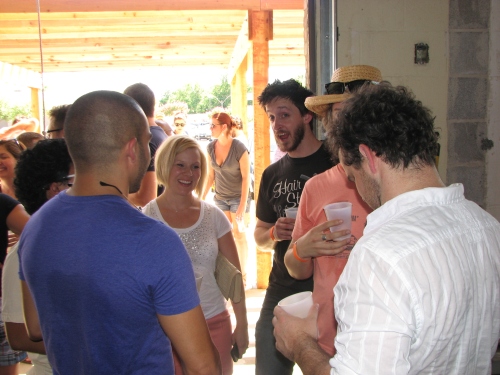 So which of you is the beer nerd?

Josh Yingling: We both are. For me it came along when I lived in Colorado. I was working for a liquor store and they put me in charge of the beer. From there I was trying beer from all over and started getting into the different styles. I must have put on thirty pounds working there. My day was to work there then take home a six pack of something really heavy, or a twelve pack. I would drink those then be ready for work the next day. A rinse and repeat type deal.

I went on to work at night clubs, pool halls, high-end sushi joints.

How did you two meet up?

JY: Matt was at the Gypsy Tea Room and I wanted to work there. I was persistent and would come in asking if they had an opening. He would say there might be something coming up and a month later I would go up and he was like “that guy never left”.  I finally got on as a bar back.

MT: I remember feeling like crap about it, but it was all we had. To Josh’s credit he did it, but he is a really good bartender. But he was the best bar back on the planet.

You have been open a year at Goodfriend. It took you a while to open, what was up with that?

It was very much a hey, what are we going to do with this? Josh said that obviously we would have good beer. How are we going to pay for it? I don’t know. Some people might call it throwing caution to the wind. We had hope.

MT: That’s what I love about the place. I am a big guy and it never feel crowded. You can take a step back and breathe even when there’s hundreds of people in here.

Who is the Banksy fan?

JY: I got that inspiration at four in the morning one night hanging out with a friend after Vickery closed. We were having some beers watching Exit Through The Gift Shop. I said fuck it, I am putting Banksy in all the bathrooms. But that has been a pretty big item of contention for some reason.

We have had some reviews that said we had Occupy Art in the bathrooms. Man, before all this whole occupy movement Banksy was this street artist. It is more about social change than about politics. To me it has been mind boggling. It is just a social piece.

There was a dude one night who wrote Fuck Obama on the poster. This guy was like sixty years old.

MT: It is always your dream to catch someone writing graffiti. I caught this guy in the act. I went out and grabbed the guy and took him out back. I said “you’re an old man, what are you doing?” In the past I would have done much worse. This is why we can’t have anything nice.

JY: It’s gotten so bad that they won’t even tell me anymore [when the poster is defaced]. It’s not even up right now. Someone tore it down and threw it in the urinal.

Why don’t you have your own kitchen here?

MT: That was Jeana’s [Johnson] idea. She is a really good friend. She said when you open your place we will do your food. To us it just screamed, why would we not do that. Josh and I love food, we love to eat, but I hate dealing with the kitchen. It’s a good marriage of talents.

You have talked about opening a package store across the street in place of the Laundromat. Why hasn’t that opened?

MT: We had to get a zoning variance. There is a dry destination on the building. Walgreen’s next door can sell beer, but just our building is dry.  It’s very involved, but we are about two months out.

MT: Deli, sandwiches, probably soup as well. I am from Connecticut originally and anywhere you go you could get this amazing lights out sandwich for like nine dollars. I can’t get that here. If I find the sandwich I want it costs twenty dollars. The drive behind that is just really good sandwiches.

The beer end of that is just wall-to-wall coolers. Build your own six pack.  The idea is to try different things. The plan from the start was to have growlers, but it’s the wrong zip code.

JY: Our plan is of course to go really American craft heavy, but we will be able to bring in a lot more Belgium’s and German’s. We will have an educated staff.

How do you get tap space at Goodfriend?

JY: Put out a good product. More than anything we want to showcase quality.

Who are you liking right now?

JY: Only because we just had all of them on, but Moylan’s Hopsickle is their big double Imperial IPA. Alpine New Belgium Super IPA. It’s over nine percent of super delicious. We also brought in Sixpoint Resin from Brooklyn. These are the holy trinity of big IPA’s right now. I get people that come in and want a good IPA, and I say you are staying for at least three beers.

That’s kind of where I am at right now and it makes me so happy talking about bitter hops and ridiculousness. Chewy and citrus.

What about the locals?

JY: Peticolas kills it. He just won a gold medal at GABF.

The local guys have been great to us. Lakewood did their release here. There were two of the guys just standing at the taps for four hours pouring. We sold 1,100 Lakewood’s in four hours. Those guys are so supportive. They work hard to put out a great product.

MT: Unbelievable. Love it, love it, love it. Grant Wood and Brad, those guys are cool and they are putting out unbelievable quality. You can tell when you drink his beer, it is more than well crafted.

Check out the party tonight and help the boys celebrate an incredibly successful year. Tomorrow we will have pics from the party and tell you how the name Goodfriend came to be.

One response to “Q&A: Goodfriend Celebrates One Year In Business”