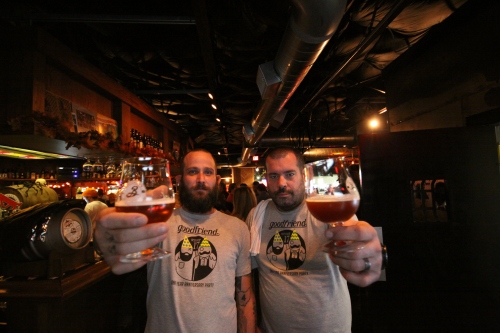 “With the addition of Trader Joe’s, the food truck park, and several restaurants, there is a renaissance taking place on Lower Greenville. We’re excited to be a part of the area’s revitalization,” says co-owner Matt Tobin.

The Blind Butcher will feature an impressive tap wall with 20 beers on draft. Expect a selection of the best in European, American craft, and local beers. Beer will also be sold by the liter and half-liter.

The menu is still being developed, but it will feature a selection of meats including sausage, pastrami, and corned beef made in-house by Chef Sitrin. The kitchen will also serve as a commissary for the group’s forthcoming project, Goodfriend Package Store, which is expected to open across the street from Goodfriend Beer Garden later this year.

The design will stay true to the building’s original 1920s style. Expect plenty of communal seating and two patios. The Blind Butcher will be located at 1919 Greenville Avenue in the former Service Bar space. Further details on the opening date, menu and website to follow.

3 responses to “The Blind Butcher Coming To Lower Greenville”