An Dallas Evening with Johnny Schuler of Pisco Porton

If you have been out on the town in recent weeks you may have noticed an escalation of a particular spirit on the cocktail menus. Pisco is a colorless or amber toned grape brandy made in Peru since the 16th century by Spanish settlers. Since that time pisco has been distilled using traditional methods, and Pisco Porton is one of the finer examples of the product. The Pisco Porton master distiller, Johnny Schuler is in the DFW area all week. Schuler resides in Lima, Peru where he owns restaurants and has an entertaining television program that features Pisco Porton.

Schuler is certainly the most interesting man I have probably ever met. He laces conversation with his rich heritage, often touching on history and certainly agriculture. Our conversations have included the intricacies of bull fights, cigars, beekeeping, the Inca’s and their methods for over-powering villages, and of course distilling Pisco Porton. Schuler is not just a figurehead of Porton, he embodies the spirit. An evening with Schuler is a dance with elegance and charm.

I was an invited guest of Schuler’s recently and we embarked on a tour about town to discover the versatility that pisco offers to a cocktail. It literally can be a substitute for any spirit. The more common cocktail made with pisco is the Pisco Sour.

The Capitan from Hibiscus

The Peruvian Pisco Sour uses Peruvian pisco as the base liquor and adds lime juice, syrup, ice, egg white, and Angostura bitters. The Pisco Sour originated in Lima, Peru. It was created in the early 1920s by bartender Victor Vaughen Morris, an American who had lived in Peru for several decades. His saloon, Morris’ Bar, was popular with both the Peruvian upper class and English-speaking foreigners. The drink was a local variation of the whiskey sour, but certainly more frothy with the addition of the egg whites, and a particular nose with the added droplets of the bitters. It is the national drink of Peru, and enjoys its own holiday in late February.

We started our evening off at Hibiscus, located on Henderson Avenue. We would actually do a walking tour of Henderson, stopping off at the various hot spots located just near Central Expressway. It was here I met with Schuler and his crew that had assembled from various parts of the country. I was greeted by our first cocktail for the evening, a Capitan. This is a delicious and heady cocktail made with Pisco Porton, vermouth and bitters. 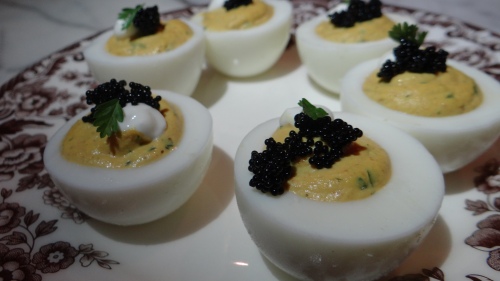 Next we checked in a Sissy’s, which is not only known for their fantastic fried chicken, but their cocktail menu that is curated by barman Chase Streitz. While we sipped on more Porton cocktails, we also devoured a nice selection of appetizers including those haunting curried deviled eggs topped with caviar, and the plump chile fried oysters. All went well with the bevy of cocktails we enjoyed.

Exactly next door to Sissy’s is Victor Tango. We popped in VT for a few more versions of Porton, including a large punch bowl that is on the menu, to be shared with a minimum of five people. The bowl seems endless, and certainly a great bargain for those who agree on one cocktail. We also enjoyed a colorful Peruvian Pick Me Up that is on the menu and is made up of lime, cherry, and a coca leaf infused syrup.  You really begin to see the diverse uses for the spirit with all the various cocktails that are not a sour.

Victor Tango’s Pervian Pick Me Up

We crossed the street to continue our bender at The Dram, that cozy lounge that is lined with plump sofas, cool lighting and some of the better cocktails in the city. Here we sampled many cocktails, including the best Pisco Sour of the evening. Schuler explained here that although the sours are quite good, and this was his favorite so far, we could not exactly duplicate the Peruvian version be cause we use Mexican limes that do not carry the same tartness. We will attempt to have some Peruvian limes shipped in to taste the difference.

Mixing Fun at the Dram

Tuna at the Porch

Our last stop for the evening was The Porch where we had more bar bites courtesy of Executive Chef Adam West. Platters of mussels, house-made burrata and red pepper hummus took the edge off all the cocktails we tasted so far. Interesting enough, the house Porton cocktail was by far the most interesting of the evening as they created their own chicha morado, which is a South American drink made up of purple corn.

In Lima and other large coastal cities, chicha morada is prepared from purple corn (maiz morado). It is usually sweet and unfermented, and is consumed cold like a soft drink. The Porch is making their own version in-house. Amazing. The result is the Porton Morado. Slightly sweet, rich in flavor, the Porton Morado is satisfyingly delicious, and a perfect way to end our evening of revelry with Johnny Schuler, the most interesting man I have ever met.