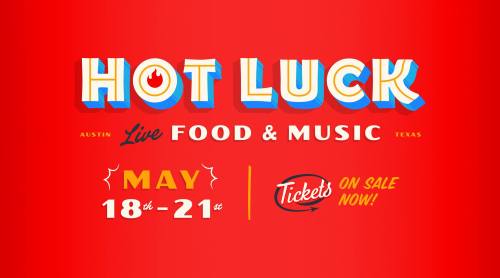 Hot Luck Festival announced today the chef lineup and ticketing for the live food and music event happening May 18-21 in Austin’s most beloved venues. The three-day festival is the brainchild of James Beard Award-winner Aaron Franklin, Guerilla Suit principal and Mohawk owner James Moody, and Mike Thelin, cofounder of Feast Portland. Together they have curated a Texas-sized get-together featuring world-class culinary talent and a true Austin live music experience. Tickets for the first-year festival will go on sale on Tuesday, March 7 at 10 a.m. CST.

“We are super excited to have the opportunity to launch a new festival with our Austin family and our extended family,” said James Beard Award-winner and Hot Luck partner Aaron Franklin. “Hot Luck will celebrate the food we love, the music we love, and the city we love.” 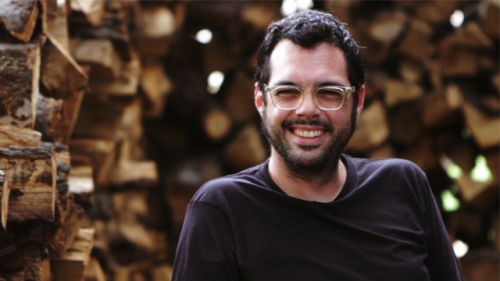 The chef lineup, featuring an eclectic collection of local, regional, and national world-class culinary talent, is as follows:

Hot Luck Festival will host a series of customized events all around the city, showcasing beloved Austin venues like Franklin Barbecue, Fair Market, Barracuda, Mohawk, The White Horse, Alamo Drafthouse, The Wild Onion Ranch, and more, allowing guests to choose their own adventure while also feeling a part of this genuine, homegrown experience. As to be expected of a true Austin fest, there will be live music every night in the city’s most iconic venues. Stay tuned for the music announcement in April.

Additionally, a brunch series will be held on Sunday, May 21 where Hot Luck visiting chefs will partner with local chefs for a Sunday brunch. More details are coming in April.

A portion of the proceeds from Hot Luck will benefit the SAFE Alliance. SAFE Alliance is a merger of Austin Children’s Shelter and SafePlace, both long-standing and respected human service agencies in Austin serving the survivors of child abuse, sexual assault and exploitation, and domestic violence.

Ticket options for Hot Luck offer something for everyone, with prices from $20 to $550:

A great song can reduce down to the simplest of instruments—the guitar, a harmonica, a voice. The same is true of a good meal. The Hi Lo is what happens when we ask our favorite chefs to share the dishes that inspired their beginnings in cooking. From slow-cooked ribs to crispy cast-iron chicken, The Hi Lo is an inspirational and interactive celebration of cooking, sharing, and eating set to the tune of good wines, Texas-style cocktails, and cold beer. Come experience the Texas-inspired and grandmother-approved uniqueness of the Hot Luck community of chefs and homies. Chefs include the following: Aaron Franklin (Franklin Barbecue), Adam Sappington (The Country Cat), Alex Stupak (Empellón), Callie Speer (Bombshell), David Bull (Second Bar + Kitchen), David Norman (Easy Tiger), Fiore Tedesco (L’Oca d’Oro), Jason Dady (Jason Dady Restaurants), Joshua McFadden (Ava Gene’s), Michael Fojtasek (Olamaie), Rene Ortiz (Launderette), and Tyson Cole (Hai Hospitality).

Hot Luck is offering a limited opportunity to experience the full weekend of all that Austin’s newest food and music festival has to offer. Enjoy main events, special parties, music shows, and more! Come hang with the chefs, mingle with the bartenders, and enjoy the most intimate food festival experience available. For a behind-the-scenes look into Hot Luck, look no further. This ticket offer is limited to a handful of (really) lucky folks.

Barbecue and Roy Choi of Kogi in Los Angeles

One response to “Austin’s Hot Luck Festival May 18-21”