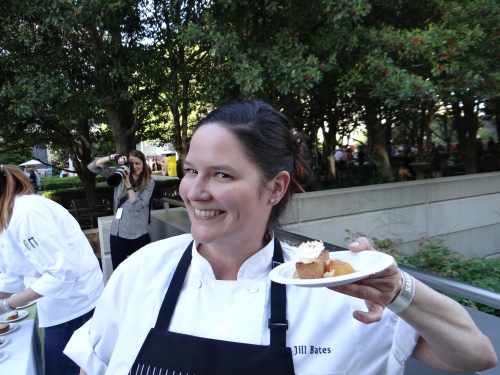 Another successful year with Savor Dallas, the areas largest food and wine festival as it introduced some amazing event locations, highlighted the area’s best chefs, slurpy good wines and cocktails and some of the best fellowship this city has to offer.

Each of the events laid out for the week replayed a version of Who’s Who of the hospitality industry which always makes it fun. Catching up on the latest restaurant news is certainly a great by-product of these types of events.

This is the event’s 13th year which began humbly out of a flagrant need for such a festival after its founders Jim and Vicki White made the rounds across the country at such food and wine festivals as the big Aspen event, noting many Texans at each.  It made perfect sense that Dallas would enjoy such an event and thus Savor was born.

Although the White’s sold the festival in 2014 to an arm of the Dallas Morning News, CrowdSource, which also purchased the rights to Untapped the beer and music festival, Vicki Briley-White is still involved as a wine consultant and was able to direct us to some of the better samples of wine at several of the events. Indeed, the vintage Perrier Jouet was a delightful addition to our week’s line-up of wine.

The week began with an opening night at the most beautiful Marie Gabrielle Restaurant and Gardens in Uptown Dallas as they offered a round of wines, cocktails and barbecue. Featured chefs included Katherine Clapner (Dude, Sweet Chocolate), Matt Dallman (18th and Vine), and Nathan Tate (Rapscallion and Boulevardier). We also found Luis Alvera offering his now legendary Trompo tacos, and Fearing’s Jills Bates with her Twinky-like version of the carrot cake.

For those with a bit more stamina, Shaken and Stirred on second night of Savor was themed with pig and plenty of charcuterie tastings, and a splendid bowl of mussels from Parigi’s Janice Provost. We spotted David Uygur (Lucia) breaking down a pig with a deft hand, and Misti Norris with a special plate of sticky rice. Our favorite bit of the night was offered by Oliver Sitrin from Blind Butcher who had a “nacho” made with a chicharone. The Happiest Hour location was simply brilliant, and the weather offered a cooling breeze that kept us lively through the evening.

The big day arrived and revved up at the Fairgrounds with the lustful Reserve Tasting where festival-goers get a head start on the very best of the night’s wine which included a slew of Bordeaux’s such as Château Cos-d’Estournel, Saint-Estèphe, 2008; Château D’Issan, Margaux, 2000; Château Ducru-Beaucaillou, Saint-Julien, 2005; Château Hosanna, Pomerol, 1999; Château Hosanna, Pomerol, 2010; Château La Dominique, Saint-Émilion, 2009; Château Léoville Las Cases, Saint-Julien, 2008. This was an honor to attend.

The night culminated with the Grand Tasting, which historically is the best of the events where you are able to sample an untold amount of restaurants each paired with a winery. You also find cocktails and scotch tastings, all too numerous to try them all.

These lines are always long, but they move quickly with the exception of when an occasional guest is a bit too thrilled to meet a winemaker and chats them up longer than time should allow.  Understandable, of course.

The group of chefs include the very best. Even though we were not able to reach each of the tables we sampled incredible fare from the likes of Casa Rubia, Gemma, The Grape, Lavendou, Water Grill, Saint Ann, Five Sixty, La Duni, Cook Hall, Abacus, LUCK, Asian Mint, Sundown at Granada, and ice cream from the inimitable Henry Gentry. Of course there was much more and all paired with great wines. That is what Savor has always been about.

The week ended with a community brunch at the Dallas Farmers Market that rallied the strongest of heart and plied them with requisite bloody Mary’s and mimosas.

The week was amazing, and now that you know you should start saving the dates for next year.