Where In Germany Was German Chocolate Cake First Made? Dallas, Texas 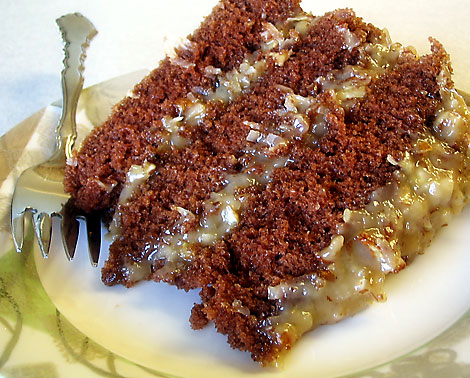 Many believe that with the name “German” in its name that it must have some sort of Bavarian roots, but this couldn’t be further from the truth. If you are a fan of this cake you actually have  Dallas to thank for the lovely pastry.

The word German is a reference to the chocolate maker, Sam German, who worked for the brand Baker’s. Originally the type of chocolate was called Baker’s German’s Sweet Chocolate, and was created in 1852. Later the possessive was dropped and the baking bar was simply called Baker’s German Chocolate. This is where the confusion started, no doubt.

In 1957 a local Dallas gal came up with her recipe for what we know today as German Chocolate Cake which used the Baker’s bar, and a homemade caramel, coconut and pecan filling, decorated with maraschino cherries for good luck.  Mrs. George Clay’s recipe ran in the Dallas Morning News and was noticed by Baker’s then  owner, General Foods, who sent the recipe to newspapers nationally, making this a wildly popular dessert.

The recipe was so popular that German’s Chocolate sales shot up 73 percent in one year.

One response to “Where In Germany Was German Chocolate Cake First Made? Dallas, Texas”