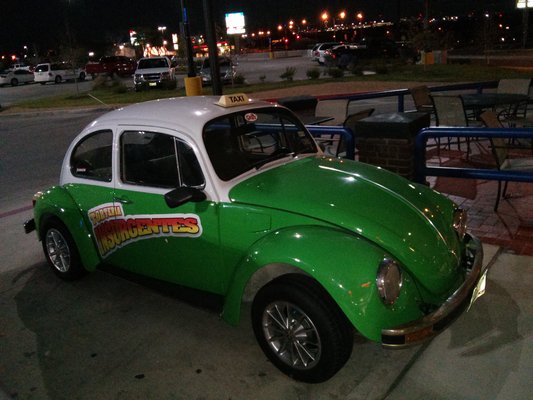 We have discussed Tortas Insurgentes before, it is a little Mexican restaurant with the Mexican green VW cab as its mascot located on Northwest Highway and Webbs Chapel in the shopping center anchored by WalMart. They bill themselves as a Mexico City taqueria and I find myself enamoured with this place, dining here at least once a week for breakfast.

The breakfast is cheap and hearty. I usually do not eat until much later in the evening after an early morning repast. Think scrambled egg loaded with chorizo and potatoes served with house-made corn tortillas. These corn tortillas seem to be served only with breakfast as I have been here numerous times for lunch and never see these. But have ordered breakfast for lunch and boom! there they are.

I also find myself enjoying the alambres. In Mexico City I have had this dish and it is served with diced chiles, onions, meats and often bacon. It can be cooked on a plancha and served with a smattering of warm tortillas.

I have also seen this dish in the Yucatan where the meats are cooked on skewers. Remember the large population of Arab descent and skewered meats can be popular. Consider the shawarma-like vertical trompo.

Tortas Insurgentes serves the former dish, no doubt cooked on their flat top grill, and in a very beautiful way. I typically order the Zarape made with chiles, onions, bifstek, chorizo and mozzarella. It is a pretty cheesy dish made this way, and is served with a third style of corn tortillas, the tiny double layered version often served as tacos. I suppose you could order flour tortillas, I have no clue what their version tastes like.

The restaurant is also known for their massive tortas, and a huge variety of the Mexican sandwich served on fluffy bolillo rolls. For breakfast order the Brasilena made with eggs, cheese and chorizo. The house named torta is served with literally every ingredient on the menu.

The pambazo is similar to the torta, but served with crustier bread and dipped into red guajillo pepper sauce. Best ordered with chorizo and potatoes.

Check out our previous story for plenty more photos and a discussion of this brilliant menu. It has been a few years but all up to date.