The Search for the World Class Gulf Oyster

The Grand Central Oyster Bar and Restaurant in New York City, putatively the world’s best oyster bar, refuses to serve Gulf Oysters. “Not high enough quality” as they would have it. Robb Walsh, author of Sex, Death and Oysters, says that Gulf coast oysters can be world class, providing you buy them at the right time and from the right source. The right time is the first quarter of the year, according to Walsh, so I headed down Galveston way to see what I could find.

San Leon, TX (ICBM) is not on many ‘beaten tracks’. Stuck at the end of an FM road that diverges off I-45 in a series of perpendicular segments at it strikes out towards the coast, the place looks disinvested in as though it were cowering down in dread of the next hurricane.

Gilhooly’s doesn’t exactly impose itself on you either. Styled in the one-storey clapboard architectural genre popular in these parts, it may be the vegetation overgrowing its walls alone that is actually keeping it upright. It obscures the signs, meaning GPS and a cutback are virtually essential for the first time visitor. Only on the return run is a weathered wooden sign visible hanging from the facing wall that tells you that you have found it. The best landmark I can give you as you drive up what appears to be a residential street looking for this commercial establishment, is a truck parked on the lawn in the front yard of the house opposite. I know that it won’t have moved because it is completely coated in an exoskeleton of rust. Apparently it has been there for many years, and that is perfectly okay in these parts.

Gilhooly’s entrance has a charm of its own. Signs read “No Kids”, “No Pets” and “Cash Only”. Those are the ground rules. Open the faded door and the first thing that hits you is the evidence that this is a cigarette testing laboratory. The air is not just thick with the smell, but stale as well.

I went to the U-shaped bar that dominates the center of the restaurant and took a seat. Opposite me was what appeared to be Robinson Crusoe’s brother: a loquacious regular who answered customers’ questions quicker than the staff. Many folks, that day, found the bathroom thanks to sibling Crusoe. On the ceiling above me hung car license plates from all over the country.  Around the walls were slung various other bits of memorabilia but I did not ask the staff, or friend Crusoe, about them –  I had oysters to order.

A woman with a bourbon and cigarette voice gave me a menu and took my beer order. I ordered the only beer that I had never heard of from the list of crowd-pleaser favorites (no craft beers here). ZiegenBock ($3), it turns out, comes to you from Anheuser-Busch. No wonder I hadn’t heard of it. A quick perusal of the menu indicated that the oysters were the only thing that could be called a specialty. The rest of the menu selection is very plain.

I ordered a half-dozen raw ($5.50) and half-dozen ‘Gilhooly’ ($7.75) oysters. The latter preparation coats the oysters with garlic butter and parmesan cheese and barbecues them. The butter and cheese melt, and infuse themselves into the oyster which is firmed as well as flavored in the heat. Walsh considered it his #1 Houston dish in 2010. Walsh also reports the reason for the quality of the oysters: Misho Ivic, one of the largest oyster processors on the gulf coast, dines here, so he selects the oysters to be sold. 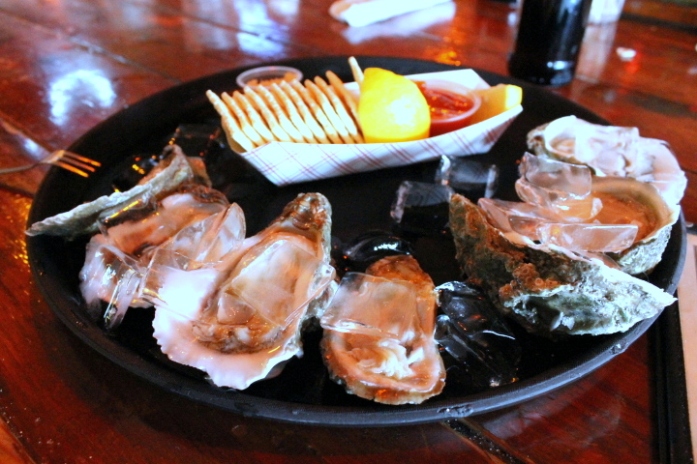 Fortunately, the raw oysters arrived first. That gave me a chance to try them in their pristine, undoctored state. I eschewed the lemon cocktail sauce provided (maybe try it at the end, I thought). The oysters were large, even by Gulf Oyster standards. The flesh was plump and succulent, like the edge of a fine rib eye steak. I held an oyster in my mouth for a second before biting down just enough to more tellingly feel the texture of the flesh. I moved my gums around the bivalve in a way that would be considered a sex act in countries that make women wear a tent to walk down the road to buy an apple. These examples had a reassuring brininess, but it was not as assertive as is the case with some other types of oyster. Earthiness and umami richness were the more prominent qualities. These were rivetingly good oysters, the best that I could recall eating.

The classic accompaniment of oysters is Champagne, and I fleetingly toyed with asking for a glass of Krug, before quickly regaining composure as the next order arrived.

My Oysters Gilhooly was a completely different set of flavors. What was lost of the primal oysterness was replaced by sweetness from the melted cheese, a smokiness from the barbecue cooking, and aromatics from the garlic. It is a taste-issue whether this is your no. 1 dish, as it was for Walsh, or if you like your aphrodisiac unadulterated. I’m in the latter category.

I paid my $16 bill and headed back down Farm to Market 517. The next time that weekend I would be offered oysters they would be a species almost solely confined to some exclusive restaurants (Daniel Boulud’s was the one mentioned). They were $3 each and, if the truth be told, not as compelling or memorable as the Gulf Oysters at Gilhooly’s. Thank goodness Grand Central Oyster Bar doesn’t sell them, or Gulf Oysters would be $3 each too.

6 responses to “The Search for the World Class Gulf Oyster”