Latin Snacks and Where to Find Them in Dallas 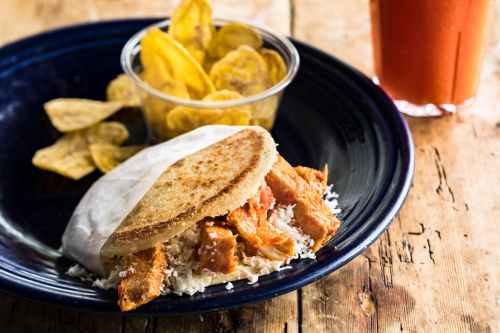 Let’s do something special today and discover some popular and also less known dishes from Latin America, and point to them on our local map. These treats will tantalize and inspire as you make your way around the city for something new. It was everything we could  do not to scream Zaguan Bakery with each dish but we wanted some places less familiar for the better part of this piece.  Walk with us!

Salshipapas can be called the poutine of Latin America, and is a dish made of french fries and fried slices of sausages. You can top it with cheese, pair it with coleslaw, slather it in mayo, drizzle it with ketchup, or drench it in hot sauce. Find them at Tineo on Arapaho. 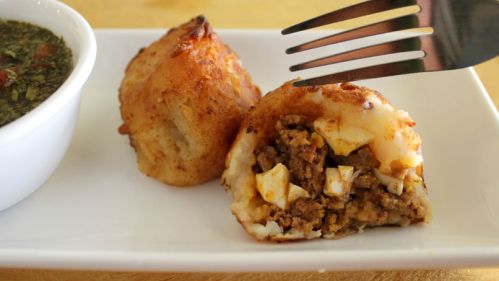 Papa Rellenas are the most popular type of croquettes in Latin American countries such as Chile, Dominican Republic, Puerto Rico, Cuba, Colombia, Peru, and the Caribbean  made with meat filled potatoes. The first recorded Latin American recipes were printed in the late 19th century, during a time when French cuisine was influencing those of Latin America. Find them at the International Bakery Cuban Dulceria and Cafe.

Arepa is a typical Colombian dish from the region Antioquia served warm for breakfast, spread with butter and cheese on top, with a good cup of Colombian hot chocolate. The maize might also be split and filled with a variety of meats. Arepa TX has a good example.

Tostones are a treat made with plantain (starchy fruit that appears like a banana) that is sliced into coins, smashed and fried crispy on the edges and slightly soft in the center. They make a good scoop for your guacamole! Look  to Vaka Lokka for an excellent taste.

Empanadas are the Latin version of the hand pie filled with savory or delights. Nothing better than stuffed fried pastry at a party or served as a starter.  Discover Espumosa Caffe for tasty empanadas and a strong coffee. 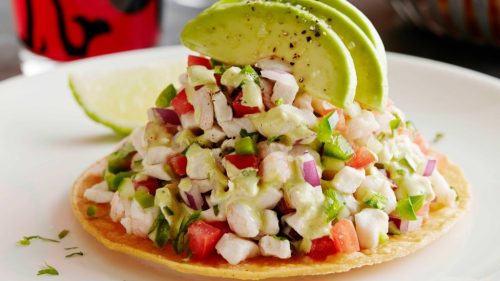 Ceviche is most closely associated with Peru, but several countries will offer their own spin in the form of different sauces and accompaniments. Think raw seafood marinated in a citrusy bath that actually cook the protein. You will  seek  ceviches out once you become hooked on the dish. Go to Palapas for ceviches.

Papas a la Huancaína are made with sliced, boiled potatoes drenched in a thick, velvety sauce made primarily of queso fresco and evaporated milk. Serve with plump black olives and maybe a hard-boiled egg or six and you’re good to go. We found the dish at Cuzco Cuisine Peruvian on Skillman.

Tortas are massive sandwiches made with bolillo bread that is firm and football shaped and stuffed with anything  you have on hand. Tortas can be eaten cold or hot, and grilled or toasted in a press in the same manner as a Cuban sandwich. Try a torta de aguacate, avocado-filled torta, or one drenched in a red sauce called torta ahogada that hails from  Guadalajara. Locally find them everywhere including our favorite Totas Insurgente.

Shuco means dirty but these “hot dogs” are actually pretty fancy. Made both with traditional hot dog links and other sausages, these are best enjoyed piled high with toppings like avocado, cabbage, hot sauce, mustard, and peppers.  We spotted them at the new Saint Martin Bakery off McKinney.

Pupusa is thick maize from the Pipil culture of El Salvador. It is stuffed with one or more of the following ingredients: cheese, chicharrón, squash, refried beans, or cheese with loroco. It can also be made with a mix of ingredients such as cheese, beans, and chicharrón. Usually served with cole slaw. A good selection of pupusa may be found at Taqueria La Pasadita located at  205 North Carroll.

Cheesy, warm and supple, these cheese-filled pillows of bread can served with a meal to make the evening extra special. We located them at Nazca Kitchen where they exceeded expectation.

Baleadas are made by topping a thick wheat tortilla with refried beans, folding it in half. You can add tasty things like cream, cheese, plantains, chicken, beef, avocado, or, you know. Whatever you like. Run to Baleadas By Lili’s 2 Bar to find them and a very fresh marisco soup with shrimp and a whole crab. Located at 3214 Shiela by Bachman since they are off the grid. 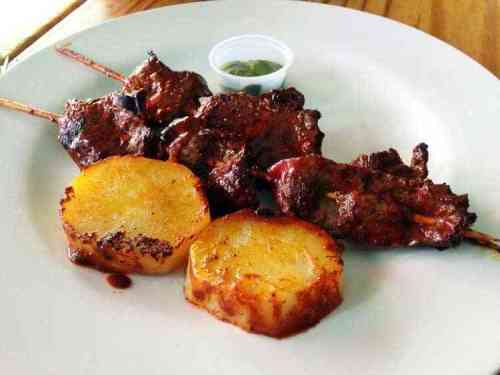 For Peruvian anticuchos marinate some meat, like beef or chicken or goat or the chicken heart, place it on a wooden stick, and grill it up. You can add some potatoes or crusty bread to make a meal out of it. Spotted at Munay Kitchen Peruvian Rotisserie Chicken & Grill on Josey.

For choripan, take a chorizo and you sandwich it between some crusty bread: Boom. choripan. Top it with onions and a drizzle of chimichurri if you want to get fancy with it. A few restaurants serve this such as La Duni. We went to La Duni to dine with famous Peruvian restaurateur and television star Johnny Shuler and the restaurant  instantly knew him with a crowd interrupting our dinner. Very authentic.