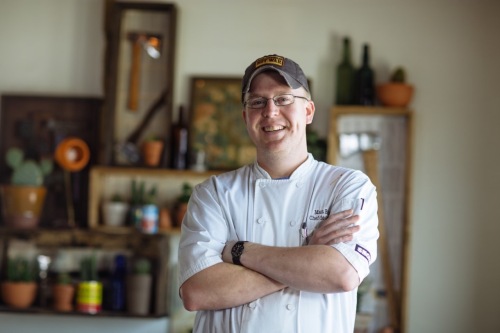 Encina — a warm and inviting neighborhood restaurant planning to offer New American cuisine, cocktails, wine and beer with influences from Texas, California and the South, will open later this summer/early fall for dinner and weekend brunch at 614 W. Davis Street (former Bolsa space) in the beloved neighborhood of Oak Cliff in Dallas, Texas.

Balke and McCombs quietly took over the lease once Bolsa closed back in January of this year and immediately went to work on creating their own restaurant.

As for the name, Encina is Spanish for Holm Oak – which is a tree and the original name of Balke’s hometown of Uvalde, Texas.

Balke says, “We were on vacation together when it hit us. We realized we could take this on and reinvent the space to renovate it, add our own personality but also create a new atmosphere, menu and concept that reflected us individually and not simply be a replicate of Bolsa.” It has always been important however, that the duo carry on with the same spirit and honor the history of what came before them. He continues, “We fell in love with the neighborhood, the regulars and the quirkiness of the space many years ago…even the limitations in the kitchen that pushed me to try different things than I previously had in my chef career before.”

The interior has the same basic structure and bones but is in the process of being updated with a new look and feel. Additionally, the soon to be climate-controlled patio is also under construction and will offer expanded table and bar space as well as a raised roof, added walls, casement windows and dining year-round.

Balke says, “I’ve spent many years in this building and now incredibly proud to bring my version of a neighborhood restaurant to the beloved and revitalized space. There is a lot of history here. I set out to honor that history, but also make it my own.

Hailing from the rural town of Uvalde, Balke is a Texas native with a penchant for hard work. With degrees in business marketing and hotel restaurant management from Texas Tech under his belt, he pursued his love for the kitchen and attended the Culinary Institute of America, where he graduated as salutatorian in 2007.

Balke’s passion for wine pairings is only outmatched by his love for cooking, and he says that if he was not in the food industry, he would be in the wine industry. After graduation, he apprenticed with James Beard Award-winning chef Sharon Hage of York Street in Dallas where he gained insights to local and seasonal food. He credits his success to Hage and says that despite a college education and formal training, his real culinary education came from her.

His tenure at York Street prepared him for his move to Bolsa and Bolsa Mercado where he became the executive sous chef. He spent two and a half years with Bolsa before his stint as the executive chef of The Rustic in Dallas. Balke then left The Rustic to work at SMOKE (Bolsa’s sister restaurant) for nearly two years. After SMOKE, Bolsa gladly welcomed Balke back to the family, but as the executive chef. He remained there until the celebrated restaurant that was a driving force in putting Dallas’ dining scene on the map, closed in January of 2020.

Balke and McCombs decided it was their opportunity to sign a lease for that same space and turn it into their own gem, Encina.