Luck be a lady tonight and throughout 2020 should she following along with our all-star guide to superstitiously delicious and fortunate foods from around the globe, but can also be found right here in the DFW area to stack the odds in her favor.

Let’s take a look at some of the more serendipitous dishes:

Soba Noodles: In Japan these lovely buckwheat noodles are slurped on into the New Year to cast good fortune upon the diner. The noodles actually  symbolize longevity and in Dallas can be found at Tei An. The house-made noodles are righteous and set diners back less than ten dollars.

Grapes: A very Spanish tradition is to devour a dozen grapes at midnight News Years Eve.  One of our very favorite tapas restaurants is Si Tapas, but they will not be open at midnight.

Pickled Herring: Our Western European friends in Poland believe that eating this fish on New Years will be an abundance of wealth. Who are we to say otherwise? Find pickled herring at our favorite Deli News sold in cream or a white wine sauce.

Mochi: Back to Japan who seems to have plenty of ways to acquire luck on New Years. Mochi is a rice cake made of mochigome, a short-grain japonica glutinous rice. The rice is pounded into paste and molded into its slightly flattened round shape. There is an ice cream version  where this ‘dumpling’ is filled with a variety of ice creams and colored to match the filling. You may find a whole host of flavors of mochi ice cream sold at the Fat Straws.

Feuerzangenbowle: Feuerzangenbowle is a traditional German alcoholic drink for which a rum-soaked sugarloaf is set on fire and drips into mulled wine. It is often part of a Christmas or New Year’s Eve tradition. Uwe Rudnick at the Intercontinental Hotel in Addison tells us that he will be serving the traditional drink all through the holiday season at their Q Lounge found in the lobby of the hotel. 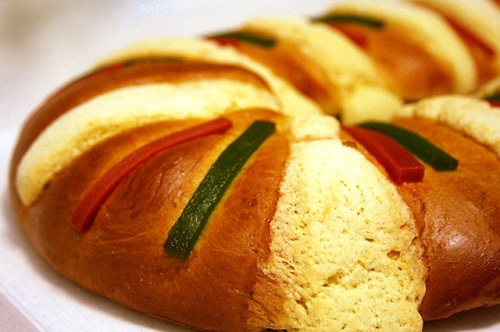 Roscón de reyes: This Mexican New Year dessert is usually consumed a few days after the first day of January, on Three Kings Day, January 6. Similar to other New Year’s Eve traditions, a trinket is hidden inside the cake (this time a figure of the baby Jesus), and whoever finds it is declared king for the day — or is given the responsibility of getting the cake for next year. They also have to host a tamale party on February 2, Candlemas. We found a fantastic version at Panaderia located at 5710 Richmond just off Lower Greenville. No website so we will supply their number: 214.828.0197.

Rice Pudding: Our friends in Sweden enjoy a bowl of rice pudding, but hide a single almond in the mix. It is considered great luck to find the almond. We have some luciousrice pudding in the Dallas area, but you will need to BYOA (bring your own almond). We list a few as they are extremely varied in styles and flavor. Try the lush coconut forbidden rice with pandan panna cotta at Pakpao, or the rice pudding laced with rose water at Kalachandji’s in East Dallas.

Suckling Pig: In Cuba pork is the lucky New Year’s dish, and in Dallas we have plenty of places to find pork. First Chinese BBQ serves a fab cispy pig you will want to savor.

Vasilopita: This is a fantastic Greek pastry that on New Year’s Day is sliced to bless the house and bring good luck for the new year. This is usually done at the midnight of New Year’s Eve. A coin is hidden in the bread by slipping it into the dough before baking. At midnight the sign of the cross is etched with a knife across the cake. A piece of cake is sliced for each member of the family and any visitors present at the time, by order of age from eldest to youngest. Slices are also cut for various symbolic people or groups, depending on local and family tradition. They may include the Lord, St. Basil and other saints, the poor, the household, or the Kallikantzaroi. In older times, the coin often was a valuable one, such as a gold sovereign.

We have it on good authority that the Preston-Forest location of Ziziki’s will have fresh house-made Vasilopita.  Make New Year’s plan to join them for this special offering. It is extremely difficult to find fresh in Dallas unless you have a Greek Great Grandmother.

Sauerkraut: Germans traditionally eat sauerkraut on New Year’s Eve to bring in wealth and good fortune on into the New Year. We found a great version at Kuby’s made several different ways with their house-made sausages. 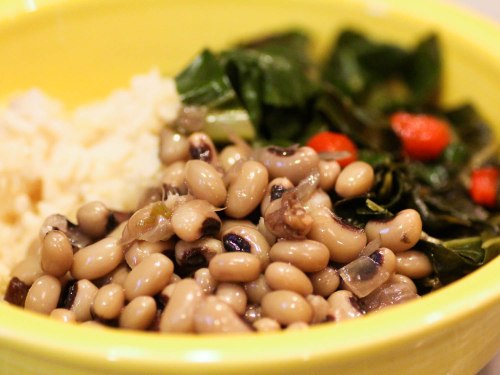 Black Eyed Peas:  Most Southerners will tell you that it dates back to the Civil War. Black-eyed peas were considered animal food.  The peas were not worthy of General Sherman’s Union troops. When Union soldiers raided the Confederates food supplies, legend says they took everything except the peas and salted pork. The Confederates considered themselves lucky to be left with those meager supplies, and survived the winter. Peas became symbolic of luck.

There are many places to find black-eyed peas on News Years Day including Celebration, AllGood Cafe, Po Melvin’s and  Ellen’s Southern Kitchen. If you would rather keep the party going for the previous evening, we might suggest finding a bottle of Treymark Vodka, which is distilled in Fort Worth using black-eyed peas.