How We Do BBQ In Texas 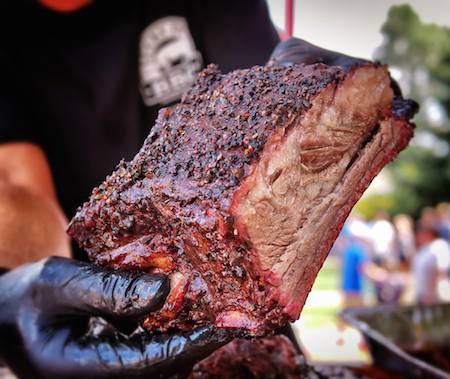 Barbecue varies by region, with the four main styles named after their place of origin: Memphis, Tenn.; North Carolina; Kansas City; and Texas. Memphis is renowned for pulled pork-shoulder doused in sweet tomato-based sauce (eaten on its own or as a sandwich). North Carolina smokes the whole hog in a vinegar-based sauce. Kansas City natives prefers ribs cooked in a dry rub, and Texans… well, Texans dig beef.

Eastern Texas’ relative proximity to Tennessee puts it in the pulled-pork camp, but in the western segment of the Lone Star State, you’re likely to find mesquite-grilled “cowboy-style” brisket. Locals defend their region’s cooking style with the sort of fierce loyalty usually reserved for die-hard sports fans. Just as you’re better off not mentioning the Yankees to a Red Sox fan, it’s probably best not to proclaim your love for Texas beef to anyone from Tennessee.

Other countries barbecue in their own style. Korean barbecue features thin slices of beef or pork cooked and served with rice. Argentina has asado, or marinade-free meat cooked in a smokeless pit. And of course, there’s Mongolian barbecue, which is neither barbecue nor of Mongolian origin but rather a type of stir-fry recently invented in Taiwan. But true barbecue is distinctly American.

Today we share some fine examples of barbecue in the Dallas area that may be off your conventional beaten path, and encourage you to try your hand at this backyard craftsmanship.

Off the Bone makes our list of tops list for bbq as they smoke a top notch baby back rib. In a world that often uses a lesser quality rib; the baby back still stands at the fore front of quality. The meat comes from a younger hog (as opposed to a sow) making them more tender and flavorful. The baby backs are cut from the pork loin which has very little fat and are much leaner than St Louis or spare ribs.

Mike Anderson’s BBQ: On a recent visit the ribs had that marvelous tell-tale smoke ring and crisp crust, all the while relenting to a tender moist bite. The brisket was still juicy and flavorful and begged another mouthful. Served cafeteria-style we enjoy waiting for slices carved by Anderson himself.

Meshack’s: When reviewing a BBQ restaurant in Texas it is always about the brisket, and the brisket can be quite exceptional at Meshack’s, but the true star of this show is without a doubt the ribs.

Ribs may be purchased in rack form by the pound, or as a sandwich which always stymied me when the sandwich arrives with a fair amount of ribs laid haphazardly between two slices of Baird’s finest, bones and all. That is simply how it is done in old school BBQ haunts, and it is a matter of dissection when actually consuming the beast. 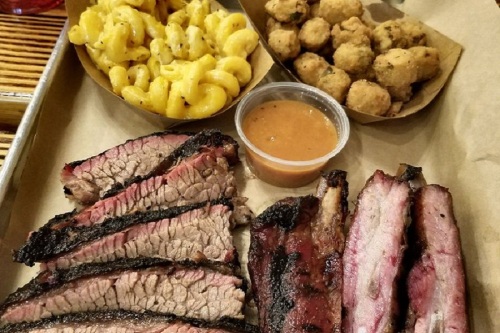 Intrinsic BBQ  & Brewery: Racks of Saint Louis ribs, Angus fatty brisket, pulled pork and chicken make this taste-maker delicious with a side of hefeweizen, or one of the half dozen brews on tap and you will have a hazy, crazy tasty day in the  sun.

Odom’s: Family run and family delicious. Taste the fatty brisket that is heavily barked and ready to run. 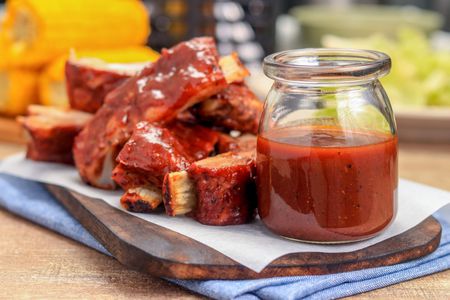 Make your own BBQ sauce the easy way.