Black-eyed peas have long been a traditional New Years dish with the thought that they bring the eater good luck. The tradition dates back to the Civil War, when Union troops, especially in areas targeted by General William Tecumseh Sherman, typically stripped the countryside of all stored food, crops, and livestock, and destroyed whatever they could not carry away. At that time, Northerners considered “field peas” and field corn suitable only for animal fodder and did not steal or destroy these humble foods.

There are a few great places to enjoy your personal pot of good luck in the Dallas area. Certainly look to the obvious spots such as Celebration where they have been serving up southern hospitality since 1971. In addition to your black-eyed peas, you can also find a great chicken fried steak, catfish and other hearty dishes to start your year off right. 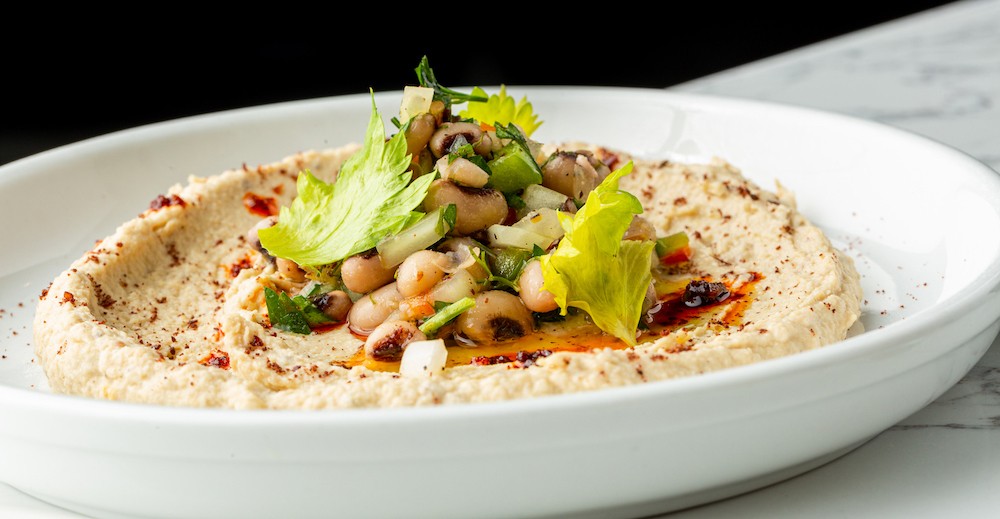 Tiffany Derry does an amazing version:

Roots Southern Table is a new restaurant in the Dallas suburb of Farmers Branch, Texas, by chef and restaurateur Tiffany Derry. For this dish she uses black eyed peas in three ways: as the base for the hummus, in accompanying fritters and in the salad that tops the hummus. For the hummus, Derry whips cooked black eyed peas with garlic, tahini, lemon and olive oil until they’re very smooth. Then she tops that with a salad of black eyed peas mixed with onions, bell peppers, celery, dill, parsley, mint and a vinaigrette.

The hummus is accompanied by akara, a fritter from West Africa made with uncooked black eyed peas, habanero peppers, onions and Derry’s own Creole seasoning. It’s all accompanied by an XO chile sauce made with fried garlic, shallots, chiles, sweet pepper and dried shrimp.

Bubba’s Cooks Country on Hillcrest in University Park across from SMU serves up more southern goodness. This is a Mecca for fried chicken, but you can also find a bountiful breakfast at Bubba’s, so you can get your pea on all through the day.

At CBD Provision located in the Joule Hotel located downtown has this lush black-eyed pea hummus which is not to be missed, especially this time of year. Other spots for the peas would include AllGood Cafe,  Norma’s, Kalachandj’s, and Ellen’s Southern Kitchen, to name a few hot spots.

If you would rather keep the party going for the previous evening, we might suggest finding a bottle of Treymark Vodka, which is distilled in Fort Worth using black-eyed peas.

Finally, look to all the Flying Fish locations for your serving of black-eyed peas all day on the first of January. It is an annual tradition.

May your new year bring prosperity and happiness. From all of us at craveDFW, we wish you a safe evening.

For those do-it-yourselfers we have a recipe for Hoppin’ John below:

Wash and sort the peas. Place them in a saucepan, add the water, and discard any peas that float. Gently boil the peas with the pepper, ham hock, and onion, uncovered, until tender but not mushy — about 1 1/2 hours — or until 2 cups of liquid remain. Add the rice to the pot, cover, and simmer over low heat for about 20 minutes, never lifting the lid.
Remove from the heat and allow to steam, still covered, for another 10 minutes. Remove the cover, fluff with a fork, and serve immediately.