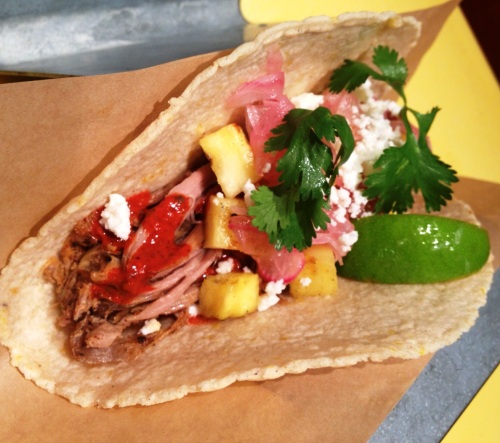 Velvet Taco sends along word that he will be offering a special taco in honor of Russell “Rusty” Fenton who passed away last week. Rusty is of course the founder of Rusty Taco. The special taco is actually a play on the Rusty #9 with a Velvet twist and includes  a house made corn tortilla with slow roasted achiote pork shoulder, avocado crema, grilled pineapple, queso fresco, fresh cilantro and pickled red onions.

Velvet Taco is donating half the proceeds from each “Rusty” Taco this week to the educational trust fund that has been set up for his daughters.    END_OF_DOCUMENT_TOKEN_TO_BE_REPLACED

Rusty Fenton, owner of Rusty Taco passed away today and we extend his wife and family our deepest condolences. Fenton was a veteran in the restaurant industry, and as one of the original principals of Uncle Julio’s he moved on to a magnificent career in the industry. Fenton  had a hand in Stephan Pyles’ Taqueria Cañonita, and also in the reanimation of the Trader Vic’s in the Palomar Hotel in Dallas.

I recall at the opening of the original Rusty Taco, Fenton was on premises tending to last minute details after he had just been released from a major surgery. That is how he operated. He was hard working with a love for the hospitality business.   END_OF_DOCUMENT_TOKEN_TO_BE_REPLACED