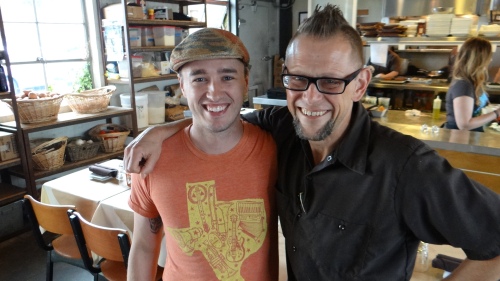 This week we checked in at Bolsa to visit with the new executive chef Joel Harrington who just returned from a three year gig as kitchen director at Red Rooster in New York. You may recall Harrington from his Dallas past where he served as chef de cuisine at Fearing’s, and exec chef at Stephan Pyles and Charlie Palmer’s. Bringing Harrington back from New York was a major coup for Bolsa as the chef has some major skills as evidenced by his new menu at the Oak Cliff restaurant.   END_OF_DOCUMENT_TOKEN_TO_BE_REPLACED

Joel Harrington recently resigned from his executive sous chef duties at the Dallas Charlie Palmer to pursue an offer that has been dangling in front of him since December of last year when he left Stephan Pyles.  Harrington is now residing in Beaver Creek, Colorado.         END_OF_DOCUMENT_TOKEN_TO_BE_REPLACED