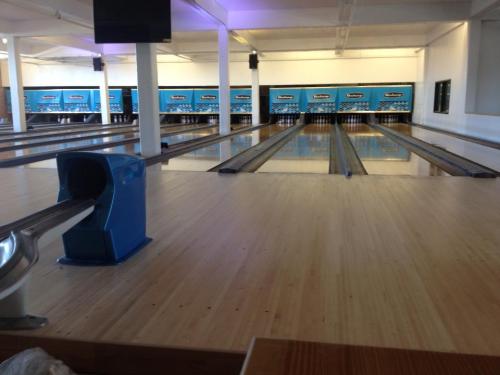 A new bowling alley/ restaurant opened in the Design District. Bowlounge is located at 167 Turtle Creek Blvd, giving you an additional reason to frequent that burgeoning side of Dallas. The new business has been in the works for quite some time now, but has finally come to fruition. The restaurant portion of the bowling alley is not complete, so it is just bowling and booze for now.

Unlike counterparts popping up in Dallas, Bowlounge is considered a ‘retro blue collar’ hangout.

Twisted Root is doing the food and beverage for the concept and will be serving 36 beer taps, four craft draft cocktails by Jason Kosmas and elevated bowling alley fare like burgers, tacos, cheesesteaks and a few other surprises.

All of this is on the successful heels of the fancier Bowl and Barrel which is located in the Shops at Park Lane. Dallas is becoming quite the bowling city.