Dallas’ fantastic storytelling series for adults, Oral Fixation (An Obsession With True Life Tales), presents “Best Of Season 6” at Moody Performance Hall on Wednesday, October 24th @ 8pm. Voted on by hundreds of Oral Fixation fans, this collection of favorite stories from Season 6 is simply sensational. This is the last Oral Fixation show of 2018! Don’t miss this chance to experience that unique Oral Fixation pleasure in person. Grab a friend or a date, have dinner in the Arts District, then join us for a raucous evening of entertainment you won’t soon forget. $35 tickets are on sale now. END_OF_DOCUMENT_TOKEN_TO_BE_REPLACED

Tagged as Oral Fixation, Storytelling, What to do in Dallas

“Jump Off A Cliff” This Friday Night with Gretchen Carlson

Oral Fixation (An Obsession with True Life Tales) will “Jump Off a Cliff” on Friday, November 3rd at AT&T Performing Arts Center to kick off its 6th season. Headlining this power-packed show is former Fox News anchor Gretchen Carlson, who sued Fox CEO Roger Ailes for sexual harassment. Carlson’s story will draw from her new book, Be Fierce: Stop Harassment and Take Your Power Back, which highlights how she completely transformed her life by jumping off a cliff in her career—a transformation so impactful it inspired Oral Fixation to assemble this special show, featuring an all-female cast. END_OF_DOCUMENT_TOKEN_TO_BE_REPLACED

On Monday, October 13th at 8:00pm, Dallas’ runaway hit storytelling series, Oral Fixation (An Obsession with True Life Tales), will kick off its 4th season with an hour long evening featuring seven juicy true tales on the theme “Go With the Flow” at the Wyly Studio Theater. In an effort to satisfy a very hungry audience, an additional performance of all Season 4 shows will be held at the Texas Theater in Oak Cliff beginning with “Go With the Flow” on Wednesday, October 15th at 8:00pm.

Headlined by the “storytelling dynamo” herself Nicole Stewart who follow up on her “Bun in the Oven” piece from last season that went on to be featured on the Huffington Post, this cast also features Nayrok Udab, the stand-up comic sister of Dallas treasure Erykah Badu, who will share tidbits from her phase with lesbianism. Other highlights include a tale of adventure in the whitewater of Chile, a woman coming to terms with her incurable cancer, a reflection on going through that most pivotal moment of adolescence without a mother, and a hysterical stint on “Wheel of Fortune.” This season opener sets the standard high for another year full of stories that will shock, seduce, and soothe the audience.   END_OF_DOCUMENT_TOKEN_TO_BE_REPLACED 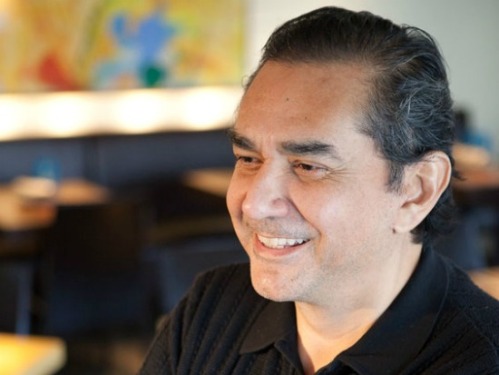 Two weeks from tonight, on Cinco de Mayo, Dallas’ live storytelling series Oral Fixation will complete its overwhelmingly popular 3rd season at AT&T Performing Arts Center’s Wyly Theatre with a dynamic and diverse evening of outrageously juicy true tales on the theme “The Whole Enchilada.”  It’s been an amazing season and they plan on going out with a bang.
The biggest catch of this cast is undoubtedly Mico Rodriguez of “Mr Mesero” (and of course founder of Mi Cocina) fame who will come out of the shadows to share his fascinating tale of success and struggle in the Tex Mex biz.  Mico is this fantastic storyteller, who often conjures these intricate back stories for his restaurants. Also noteworthy are a Dallas Observer writer’s raunchy play-by-play at a recent enchilada-eating contest and a woman’s remarkable journey through evangelism and sexuality conversion therapy to accepting herself as she is.

END_OF_DOCUMENT_TOKEN_TO_BE_REPLACED

This Monday, April 14 at 8pm in the brand-new venue on Level 6 of the Wyly Theatre, Oral Fixation will bring you seven juicy true-life tales on the theme, “Ducks in a Row.”  Join Oral Fixation for an evening of stories including a woman exposing the intricacies of life with OCD, a lesbian’s attempt to learn how to ride a bicycle at the advanced age of 22, and a new dad’s attempt to reconcile with his wild little brother.    END_OF_DOCUMENT_TOKEN_TO_BE_REPLACED

Oral Fixation’s Next Show Is March 26 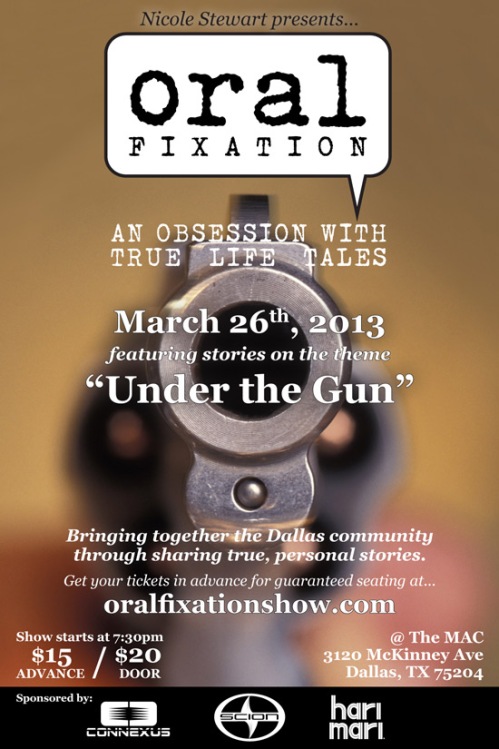 The name of the uber cool live show that features performers reading their true stories about an evening’s particular subject can make you giggle a bit, but Oral Fixation is one of our city’s hidden treasures. The next chapter of the program is set for March 26, 2013 and is sure to sell out as all the shows have.   END_OF_DOCUMENT_TOKEN_TO_BE_REPLACED