May The 4th Be With You: Where Would Your Favorite Star Wars Character Eat In Dallas?

Happy May 4th. Celebrate the Star Wars themed day by eating where your favorite Star Wars character might. Where would you go? We have a list!

Darth Vader: Power lunches and big beef dinners are in order. We would send Vader to one of our local steakhouses like Del Frisco, Nick and Sam’s or Pappas Brothers.  We are sure he will enjoy the wine lists as well.

Luke Skywalker: Luke seems like a simple man, even though his abilities lead him to eventually save the universe. We have it on good authority that he would appreciate the riblets at Applebees.

Chewbacca: This Wookie would need to check out one of Dallas’ dog friendly patios for lunch or dinner. We suggest Sate and Allen, Cane Rosso or Lee Harvey’s.

Padme Amidala-Skywalker: We think Padme might enjoy an elegant afternoon tea so we are sending her to the Adolphus for their legendary tea service.  Some of the staff thinks she would perfer meeting a bad boy at one of our local biker bars, so after tea we would rush her off to Stroker’s on Harry Hines. 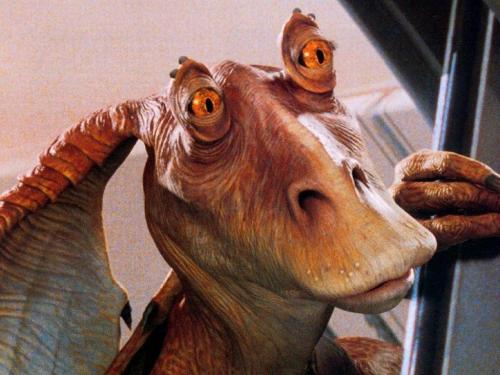 Han Solo: We think Han would appreciate the view at Twin Peaks in Addison. There he can enjoy all the pulled pork nachos and wings he can muster. Since he is on the lam, it is a quick in and out for very little cash.

Yoda: We are fairly certain Yoda would appreciate the digs at one of the vegetarian spots in Dallas so we have a car waiting to escort the Jedimaster to V-Spot or Kalachandi’s.

Obi-Wan Kenobi: It was unanimous that Obi-Wan might enjoy the early bird specials at one of the many cafeterias in Dallas.  Our favorite is Highland Park Cafeteria.

Princess Leia Organa: This bird would really get it on with the Big Rich set of Dallas and with out a doubt believe she would enjoy dinner the Woodhaven Country Club in Fort Worth.

Jabba the Hutt: Jabba is a buffet man from way back but still think he would enjoy the all-you-can-eat concept at one of the Brazilian steakhouses such as Texas de Brazil or Fogo de Chao.

R2D2: Nothing but the best for this little guy. We are sending him for a car wash and an oil change at Car Spa.

Jar Jar Binks:  Although instinct tells us he would enjoy a Happy Meal or a trip to the Dallas World Aquarium, we feel this is a chance for us to tout the city‘s best fish chips which can be had at the Old Monk on Henderson.

Where would you send your favorite character?

Filed under Steven Doyle, What were we thinking?

2 responses to “May The 4th Be With You: Where Would Your Favorite Star Wars Character Eat In Dallas?”