Give Dad The Gift Of Beef This Father’s Day 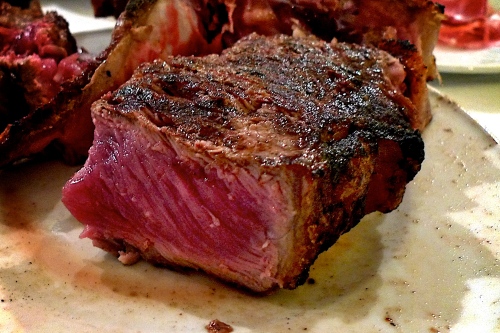 Jimmy’s Food Store owner Paul DiCarlo wants beef for Father’s day. Not just any beef, but instead he wants to be flown to Tuscany for a Bistecca Fiorentina made by Dario Cecchini, ‘the Butcher of Panzano’. The DiCarlo sons won’t be flying their father to Tuscany this Sunday, but we have it on good authority that the boys will be grilling that very slab of beef here in Dallas for their dad.

A real Bistecca Fiorentina comes from an ancient Tuscan breed, the Chianina cow. It is one of the world’s largest breeds; tall and alabaster in color. The cow is generally used as a beast of burden due to its strength and stature, but the meat is prized for its succulent flavor.

To cook a Fiorentina, you need red hot coals. Grill the giant haunch of beef, which is actually a porterhouse that tips the two-pound scale at minimum, to a very rare state and season simply with a good salt and fresh cracked pepper. Do not be tempted to overcook the meat, as this would render the dish to a simple steak, and you may as well grill a fish. Allow your beef to rest for about 15 minutes then serve table-side.  Bistecca Fiorentina is meant to be shared.

Pair this dish with DiCarlo’s Banfi Brunello di Montalcino, which is on sale for $49.99. He is also offering his prime ribeye, sliced to order, for $11.99 a pound. A bargain at twice the price. Be sure to pick up a few cannoli for dad while at Jimmy’s.