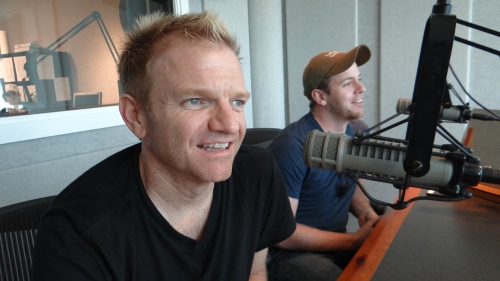 If you missed last week’s craveRADIO you missed plenty of great action. We started the first hour with Wade Hampton. yes, that Wade Hampton. He was our own personal rock star in studio. Wade is a mega DJ, and was part of the Starck Club scene back in the 80’s. He also was behind the W Hotel’s Ghostbar. Wade is now one of the owners of SISU in Uptown Dallas and runs the entertainment program at the hopping club. He is also behind the Starck Project which should be released soon. It is a look back at one of the most important clubs of its era, and rivaled that of any in the world.

Also on the program we enjoyed chatting with chef  Jason Harper from Trio Café in Colleyville.  Harper is knocking it out of the park in the suburb with simple but kicked up soup and sandwich style lunches, and in the evening with his special flare of New American cuisine. Harper is from a restaurant family and has an austere history working with great chefs, most recently with Kent Rathbun.

Later we enjoyed talking beer and burgers with Fort Worth burger king Keith Grober of Rodeo Goat. We have written several articles on Rodeo Goat and they were recently named best burger in Fort Worth.

If you missed hearing our show live, you can also tune in to IHeartRadio.com from any spot on the globe where the internet can be found. Otherwise hear us on 1190am from 4 to 6pm each Sunday. This next Sunday we do a  remote broadcast from Kent Rathbun’s BBQ  Workshop.  I guarantee you will love that meaty program.