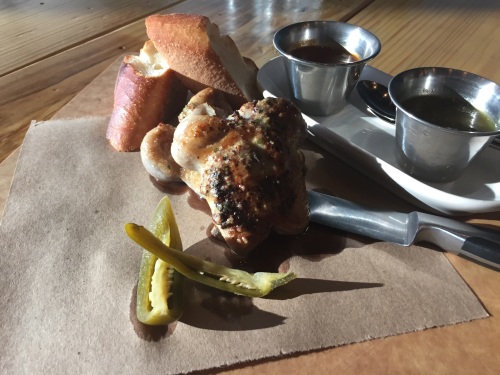 I thought Dean Fearing had a lock on the consumate preparation of Texas’ favorite game bird, bobwhite quail. However, funky Greenville Avenue American bistro Clark Food and Wine Co. is going to give him a run for the money. These birds are delicately grilled with ample seasoning and sever obediently when cut with a knife, although I recommend picking the leg up and sucking off every last meaty morsel.

Clark is the product of Randall Warder (he named it with his mother’s maiden name) who, for nine years, was at The Mansion restaurant at the time that Dean Fearing was chef. Maybe that was the quail connection?

On a chilly midweek night, Clark was hopping with a nearly full restaurant and bar. The bare  brick walls give an energizing vibe to the experience, as did the fact that I must have been there on chick night. Six tables around us were occupied by groups of beautiful women. Check out the cocktails based on Texas spirits and the local beers as well. Kegged Duchman Vermentino is the only Texas wine for now but Warder says more may be on their way. Prices are moderate with lots of shareable dishes.