Rapscallion will open for dinner on Tuesday, July 7th which is the newest collaboration between partners chef Nathan Tate, Bradley Anderson and Brooks Anderson. Located at 2023 Greenville Avenue, the group aims to bring a true neighborhood bistro to the bustling Lowest Greenville Entertainment District. With the same commitment to flavor and friendly, welcoming service as its elder sibling Boulevardier, Rapscallion will offer a menu heavily influenced by Tate’s upbringing on a multi-generational, still-operating family farm in Rockwall, Texas. 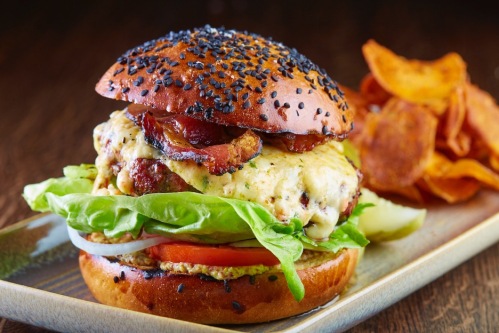 Heavy with unexpected flavor profiles, the menu reflects Tate’s Southern roots but at the same time will never be confused with classic southern cooking. Tate features fresh, seasonal preparations – some of which will utilize products from his family farm, Tate Farms.

Tate and chef de cuisine Jonathan Peters will use a J&R Manufacturing custom wood rotisserie and custom wood grill to prepare nearly all of the in-house dry-aged beef, pork, poultry and seafood. The steaks will be dry-aged aged in a large, customized refrigerator located behind the Rapscallion bar in full view of the guests.

Brooks and Bradley Anderson are incredibly excited to unveil Rapscallion’s all-American, 126-bottle wine list. Out of this list, 60 of the bottles are priced at $50 or below. Anderson continues, “Just as the food menu has surprising twists and turns, so does the wine. We have carefully chosen many lesser-known grapes being made into surprisingly delicious and value-driven wines right here in America:  arneis, roussanne, trebbiano, carignan, nebbiolo and valdiguie among many others.” The list will also feature more common varietals regularly associated with the world of American wine.

The Cocktails and Beer

General manager and head bartender Eddie Eakin has earned his reputation as one of the area’s very finest beverage professionals from his work at both Veritas Wine Room and Boulevardier.  Proficient in beer, wine, spirits and cocktails, Eakin will oversee a large cocktail program with a focus on spirits distilled from grain, cane, and agave. He will implement a regularly rotating list of proprietary cocktails and elegant interpretations of the classics. In addition, Rapscallion will offer martini service with house-pickled garnishes to pair with Rapscallion’s oyster selection. The beer selections, like the wine, will be 100% American-made products.

Chef de cuisine Jonathan Peters has been working alongside Tate for many months.  Houston born, Peters grew up in the Dallas area.  Peters changed careers and started cooking in 2003 after leaving the tech industry where he had worked in since 1996. He went to culinary school at Le Cordon Bleu in London, UK from 2004-2005 and then moved to Los Angeles to work under chefs Brendan Collins, Alain Giraud, Warren Schwartz and Eric Greenspan doing contemporary California cuisine and classic and new French cuisine. Peters also worked as a corporate chef for Gordon Ramsay, opening three restaurants in fourteen months around North America, as well as food production and training for several of Ramsay’s television shows. He was executive chef at Chamberlain West Hollywood and at Palihouse in Los Angeles before returning to Texas to be closer to family and joining the Rapscallion team.