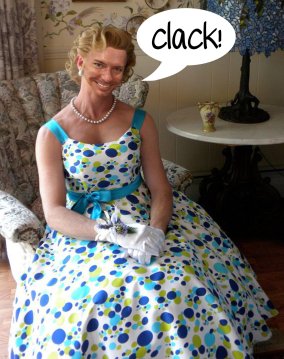 Please welcome a new feature on craveDFW.  Ask Tammy Manners  is a local advice column that runs daily.  We will feature one of her columns weekly.

Tammy is a prim and proper gal. Elegant, glib and regal; Tammy has a knack for giving timely advice on all of life’s pressing problems. A yet discovered television and movie star, Tammy was de-pom-pommed as a college cheerleader, impeached as the university student body president and de-throwned as the homecoming queen. A widow at the early age of 40 and mother of a precious little dog, Tammy is the epitome of bouncing back. As she always says, “With a glib tongue and a ready smile, the world is your oyster!”

Tammy – I am having a little coffee and dessert get together. What should I serve?

I wax and wane a little Americana today as I very well remember my first, Invitation only, Invitational. A friend last night tells me of his planters wart on his feet. I recommend Oak Lawn Dermatology and Age Management Center. Try a bowl of Planters Peanuts for your party.

I support companies that are in bankruptcy. It isn’t the company’s fault. It’s the retiring workforce and the pensions that eat into the bottom line. Take Hostess Ding Dongs and Twinkie. It doesn’t cost much to make these little cakes. I have a background in cost analysis and I am certain with wages, factory, shipping and all overhead, including ingredients and packaging it costs less than $.50 cents per carton to get a box of those delicious treats to the store. The retail cost is $12.00 for 20 Hostess Twinkie. A nice profit.

Hostess files for bankruptcy citing pension and benefits. I could go off on pension and social security, then Jenny Craig, will be upset and I will miss my yoga class and have to start my day all over again. So the retiring Twinkie worker gets social security and a pension? I can see the benefit of a pension for a teacher, police officer, fireman and army veteran. A Twinkie, maker? Hostess should fire the entire work force on the spot and hire a more competent staff to replace them.

Profit margins are cut into by the aging flight attendants who have been eating too many Hostess Cupcakes in the Galley. It’s not like they are really waiting on the customers. Recently, on a late night flight from LAX International Airport I saunter back to coach from first class to prevent thrombosis and to see what is lurking about in the back bowels of the aircraft.

The flight attendants are crammed into the galley selling Girl Scout Cookies, waiting for a pension and meanwhile a nice Jewish customer is pushing her button crying in a panic, “Miss! Water, crackers, peanuts, anything, my husband is starving!” “Madam, we take debit or credit cards.” It’s like a North Korean concentration camp back there. I go sit down in seat 6F, wrap myself in my red blanket and eat my warm nuts, drink my sparkling water as Sigourney Weaver turns to me and I become an Ice Princess when she breaths on me. I just ask for an autograph.

Flying American isn’t glamorous like it used to be. It will be when they sponsor my upcoming television talk show, Ask Tammy Manners, and I get free travel. I will publicly come out in favour of their company.

Traveling to Tampa on American Airlines, for the Thanksgiving meal and family time; the intercom system is down and the air hostess makes the pre-flight safety announcement via bull horn. Once to first class, once to the flyers in front of the wing and once again to the back of wing crowd. If the plane goes down, is she going to run back thrice, and warn the people via red bullhorn to prepare to die? A mile high ride of Paul Revere, “Once if by land; two if by sea?” I say with the new airplanes that American has purchased, out with the old and in with the new. New suits for the in-flight crew, younger and more attractive men and women who are happy to see the world flying from Dallas Fort Worth International to Tulsa Regional. I don’t want to pay someone’s pension because they chose to be a flight attendant.

On a Delta flight recently, the air hostess doesn’t make the pre-flight safety announcement. It is the captain. The door swings open and a tall, dark, handsome Persian comes out, puts his hand on his hip and says, “this is your captain and I am in control of this aircraft. Your flight crew is to enforce air regulation rules and THEN make your flight enjoyable. Don’t make me turn this aircraft around. I will put you out and you will be met by federal authorities. Have I made myself clear?” “Yes, sir!” and then not a peep from the crowd. No crying babies, no impending divorces, no love for the mile high club. The men and women in their stylish red suits go about their job and it is “thank you,” and “please may I?” I’d give some money to their pension fund.

Truth be told, I want to be a flight attendant. Traveling the world and breaking up marriages flying the friendly skies.

While living in New York I get a call from an agent who tells me to go to a call for the Broadway production of Annie, Get Your Gun! starring Bernadette Peters. Ms. Peters is in need of a stand in and since Bernadette and I look so much alike they chose me for the audition. I get dressed in black Prada shoes, cigarette pants and a short sleeve cashmere sweater underneath a black Prada waist high leather jacket. My hair slicked back and parted on the side at six feet two inches in heels I resemble the demure red kinky haired Peters? I look like I am auditioning for Grease. I hear the word, “Gun” in the title and get confused.

They start with a dance routine and I stand in the back swaying back and forth from the waist up. Smiling and grinning. Mugging for the imaginary film cameras that will eventually film me as Ms. Peters will fall into the orchestra pit, I will get top billing and go on to win a Golden Globe. As they pull Peters out of the pit I break out into song, “Anything you can do; I can do better. I can do anything better than you!” Peters grimaces on the stretcher, “No you can’t” “Yes, I can” “No you can’t,” “Yes I can, yes I can, yes I can.” The audience jumps to its feet. I don’t win a Tony.

“Tammy.” “Tammy?” “Tammy!” “MISS MANNERS!” “Yes, mister producer?” “you are standing around in a daze back there and this is a dance routine, we see that you can sway back and forth. Step, kick, kick, lean, touch!” “Oh I don’t dance.” “What do you do?” “I am a personality.” “NEXT!” “How rude!” My Broadway career is over. I was a star on Broadway once. Just not in a theater.

Crawling back to Dallas I invite some guys over for one of my famous, Invitation only, Invitational. I serve up some, Little Debbie Snack Cakes and DING DONGS. Not Twinkie. Cookies and cream ice cream by Blue Bell. I play Moody Blues, light a Marlboro and sway back and forth as the crowd snaps my picture.