Flying back first class from London gave me a chance to board first, sleep on a full-flat seat and take on board something larger than a reading glasses case without being charged more than the price of half a tank of gas. Another perk of first class travel is first class food. American Airlines says its menu selections are “inspired by you and created by our experienced culinary team. So sit back, and satisfy your cravings with the fine cuisine offered onboard.” They then say: “Satisfy your palate with our chef-inspired menu options that range from succulent entrées to light and refreshing selections.”

Buoyed by such promises,  I eagerly awaited meal service. The glossy, printed menu informed me that I would start with an amuse-bouche of “Chicken Pakora with Mango Chutney” (right). The wait was not to be long. Cabin staff bustled around in the kitchen and reappeared with china bowls containing. . . containing what? Two spherical mediocrities on a cocktail stick atop a miserly portion of chutney. The uninspiring appearance turned out to be this dish’s biggest strength. In the mouth, these pakora were just glutinous balls of tasteless glop. Either the recipe had gone wrong in the kitchen, or these were made of those resins you see on documentaries about industrial plastics. These images show the light snack fritters that I was expecting and they bear no relation to the dense, leaden orbs that we were served.

On to the starter. I passed on the Thai Chicken and went with the choice of smoked salmon. Salmon is always a good bet at 35,000 feet, owing to its strong taste, and smoked salmon has the strongest salmon taste (below). If the previous course had been arranged by an apprentice on his first day, then this was his second effort.  He seemed to have grasped the rudiments of presentation and constructed a dish that could, with the shaping of the cream cheese and the placement of the folded salmon slices on the blinis, be described as appetizing to look at. The taste was more of a mixed bag.  The strong points were the forceful taste of the salmon (likely raised in a concentration farm in Scotland) on the blinis along with those large capers. But the spring peas in the blinis were bland and the cream cheese must have been some leftover pus from the documentary that inspired the first course.

Thus far, American Airlines wasn’t doing well. I wanted the names of those chefs who had inspired these dishes. Had they flunked out of the first week of “Hell’s Kitchen”? Did they stage at White Castle? 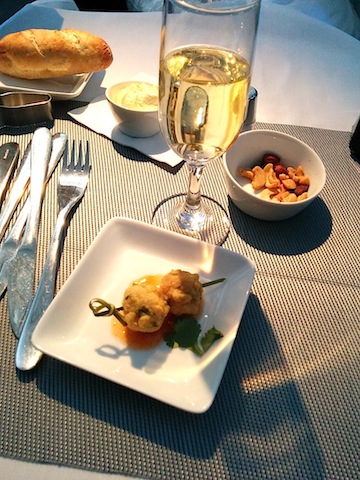 Morel mushroom soup tasted like morel mushroom soup and even looked attractive with its deep earth tones against the backdrop of its white serving bowl.  But Americans culinary winning streak was not to last. Seasonal greens with fresh vegetables, asparagus and pesto mozzarella with honey Dijon dressing may have been better described as “grass with gloop.” The oversweet honey Dijon dressing would never get through French customs.  If Paula Lambert of The Mozzarella Company in Dallas had made the airline’s cheese, she could have used it to fill holes in the Deep Ellum sidewalk, not for human consumption.

The entrée was another step up (confidence-restoring would be too strong a term). Look at the color of that Chateaubriand (right), as it is luxuriantly called. Perfect medium rare and with gratin potatoes and sautéed leeks that stood up to the strain of high altitude. The tenderloin wasn’t prime grade , but it wasn’t Kevlar either. A reasonable effort. 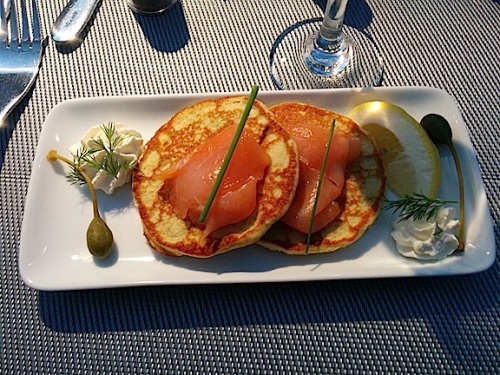 One of the other entrées made me think of home. Crab cakes with spicy hollandaise, warm cabbage, sautéed greens and roasted potatoes were straight from the Sam’s Club freezer case. To compensate for the lack of any crab flavor, they had been weaponized with salt. To paraphrase a million Yelpers, “yum.”

Desserts come on a separate menu and so they should. The Traditional Ice Cream Sundae is Ben and Jerry’s vanilla ice cream scooped into a bowl, drizzled with butterscotch (or hot fudge) from a jar, and sprinkled with pecans from a packet and whipped cream from a can. This masterpiece of culinary technique was so divine that I wanted to ask for a second one. 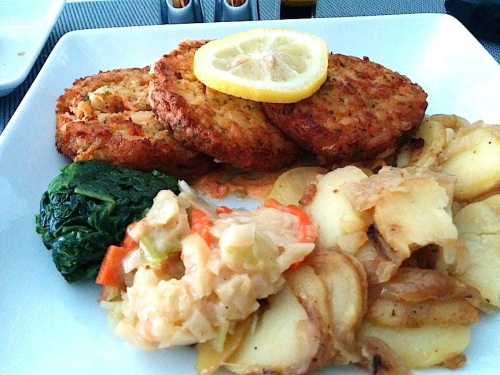 All of this gastronomic excess is yours for about $8,600 each way. Although the wine list is a compensating bright spot, I am so glad I used miles to buy my seat as it dulled the disappointment that the pinnacle of what American Airlines does is so appallingly bad. It’s only April, but so far this goes down as my worst meal of the year.