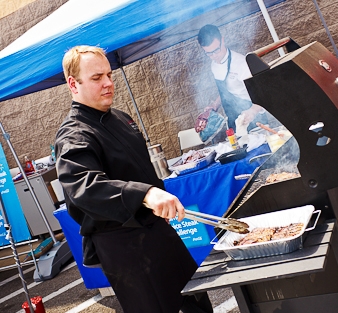 The Common Table recently hired a new exec chef who brings plenty of expertise and enthusiasm to the kitchen. Rodman Shields plans to continue showcasing beer and food pairings with an emphasis on creating quality, contemporary, approachable dishes.

Originally from Orlando, Executive Chef Rodman Shields was lured into the culinary world when his passion for this industry and for food was recognized at an early age watching his grandmother, a great cook of southern cuisine.  Prior to college, Shields apprenticed at Interlachen under William Wolf, member of the 1994 Gold Medal winning Culinary World Cup in Luxembourg.  Shields went on to study the culinary arts at Johnson & Wales University in Charleston, South Carolina.

Shields has held numerous Executive Chef and Executive Sous Chef positions in Dallas Fort Worth including Executive Chef at Nick & Sam’s Steakhouse.  Most recently Rodman has been working for Consolidated Restaurant Operations where his role included R&D and menu development for new concepts in addition to operational duties as Executive Chef at Cool River in Las Colinas.

The Common Table has been a leader in the development of the North Texas craft beer scene and has created a loyal following of craft beer lovers. It will be interesting to follow up on what Shields does to the menu at the Uptown brew pub. In the past Shields made one of the very best burgers we have ever tasted.