After nearly six years in Uptown Dallas, Stephan Pyles Concepts announced it has decided to close Stampede 66 by Stephan Pyles and will be relocating Stephan’s ‘love letter to Texas’ to the new Delta Hotels by Marriott Dallas Allen & Watters Creek Convention Center this January 2019.

Stephan Pyles said, “While we love Uptown and Downtown Dallas, this particular part of Uptown is saturated, surrounded by vacant real estate, constant construction lane closures and neighboring high rise construction that has made it harder and harder for doing business. This allows us the unique opportunity with Benchmark Global Hospitality to have some of our concepts at both ends of the DFW Metroplex and bring Stampede 66 in various forms to more people.” 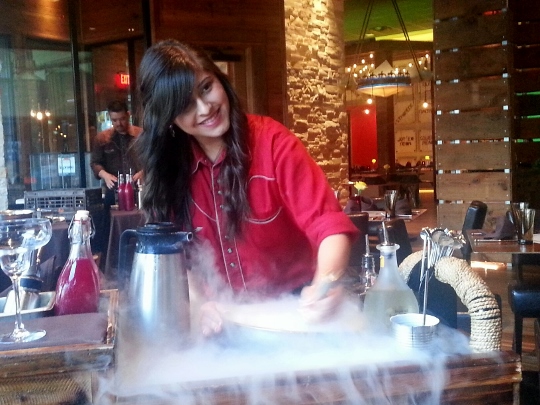 Inspired by his upbringing in Big Spring, Texas, and learning to cook at his parents truck stop restaurant, with the inception of Stampede 66, Pyles, the first Texan, James Beard Award-Winning “Best Chef Southwest,”  created what he refers to as “Modern Texas” cuisine – familiar Texas dishes re-interpreted with a contemporary twist.

Stampede 66 by Stephan Pyles won Esquire and D Magazine’s Best New Restaurant honors in 2013 and has been in the top 30 of the D Magazine 50 Best Restaurants annually ever since. It achieved 4-Stars by The Dallas Morning News’ former critic Leslie Brenner. It has hosted many famous guests from Garth Brooks and Trisha Yearwood, to Olympian Jonny Moseley and President George W. Bush and First Lady Laura Bush to events for Neiman Marcus, American Express, Southwest Airlines, Citibank, Visit Dallas, and Cowboys & Indians Magazine.

CraveDFW has given Stampede kudos every year since opening including “best fried chicken” and “best chili” among other notations.

Forbes Travel Guide, The Telegraph in London, John Mariani, Yelp, Trip Advisor, Culture Map, Qantas Airlines Magazine, BlackBook, Celebrated Living and many others all have lauded Stampede 66 by Stephan Pyles as the top place to bring out-of-towners in Dallas-Fort Worth.

Collin County developers and city officials have been making requests for a Stephan Pyles restaurant for more than two decades and they are finally getting it.

Allen resident and local business owner Robin Allison, who attended the recent Topping Off pre-opening celebration for Delta Hotels by Marriott Dallas Allen said, “Many of my most favorite dining experiences over the years have been at one of Stephan Pyles’ restaurants.  I am really looking forward to these openings!”

Pyles has had successful consulting relationships with American Airlines and airport and hotel partnerships with his concepts for several years at the Hotel Eilan in San Antonio, The Venetian in Las Vegas, Dallas-Fort Worth International Airport, Dallas Love Field, and Hotel Zaza and Dragonfly Restaurant.  His most recent role as Executive Culinary Partner with Benchmark Global Hospitality paved the way to formulate a plan to expand the Stampede 66 brand while modernizing it at the same time and bring it closer to fans who have never had his concepts in their midst.

There will be not one, but three Stephan Pyles concepts housed inside Delta Hotels by Marriott Dallas Allen & Watters Creek Convention Center. In addition to Stampede 66 with Pyles’ signature, award-winning Honey Fried Chicken and BBQ Brisket, there is Canyon Bar named for Pyles’ late-great Star Canyon, Dallas’ iconic restaurant of the 90s. The bar will feature classic cocktails, artisan cocktails as well as Pyles’ classic Modern Star Canyon, a prickly pear margarita frozen with liquid nitrogen.

The Modern Texas menu will offer creative takes on Texas and southwestern classics such as Duck & Wild Mushroom Empanadas and Shrimp Ceviche with Passion Fruit and Coconut. Additionally, there will always be full meals available, including burgers, seafood and a steak, such as the Bone-In Cowboy Ribeye with Red Chile Onion Rings. Provisions 66 will be a 24/7 grab and go concept. Stephan Pyles Catering will also be facilitating the food and drink for the hotel’s meetings and conventions. There is 90,000 square feet of meeting space available.