Boiling It Down To Crawfish 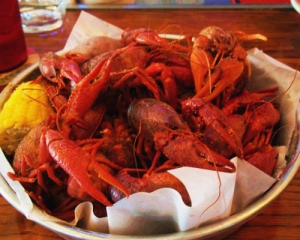 boil them in a shit-ton of cayenne, black pepper, bay leaves, onion powder and paprika? You have shellfish crack.  I mean honestly, has anyone ever eaten just one crawfish?

And it’s not just the crawfish I crave.  You can have your blooming flowers. For me, boiling crawfish is synonymous with spring. If it’s boiling season, it means it’s warm enough to go outside and hang out.

The hissing of the propane, the rolling boil, the punitively-spicy corn and potatoes. Zydeco and second line blaring from the speakers…seriously, if you can’t have fun at a crawfish boil you aren’t that cool.  A good litmus test.

Crawfish is not haute cuisine, but it can be a form of culinary self-expression.  No two people do it the same.  Liquid boil or dry seasoning?  Sprinkle the seasoning on the boiled crawfish or not? And what seasoning do you use? Zatarains is popular, but i like the savory notes of LaDonn’s.  It comes in a shady unmarked silver package with no FDA-approved info on the back. That’s how you know it’s good.

Crawfish is not haute cuisine, but it can be a form of culinary self-expression. 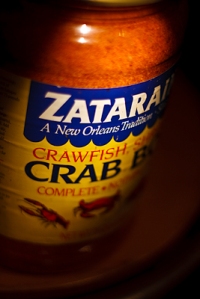 And if you are just putting corn and potatoes in your boil, you are missing out.  Whole garlic cloves are a must. Artichoke hearts turn into mushy spicy sponges.  Mushrooms add a whole other level of flavor…i’ve even seen portabellas in there. Lemons are traditional, but try oranges for an unexpected tang.

I crave drunkenly trying to read the newspaper taped to the table. Speaking of which, I crave Abita Amber. I crave the piles of heads in front of me…and I crave putting those discarded heads on my fingers for my famous crawfish puppet show. I crave laughing at the blood curdling scream from guy who forgot to wash his handsbefore going to the bathroom (think about it).

I crave crawfish boils and it’s just about that time.

4 responses to “Boiling It Down To Crawfish”