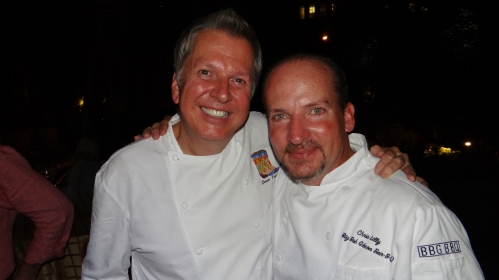 Guests swarmed the Dallas Ritz-Carlton Hotel to help celebrate Chef Dean Fearing’s fifth anniversary of the move from his legendary stint at the Mansion to open his own namesake restaurant Fearing’s.

One very important guest was barbecue chef Chris Lilly from Big Bob Gibson Bar-B-Q in Decatur, Alabama who was on hand to ply the hungry crowd with his special brand of smoke. The pair of chefs met at the South Beach Food and Wine Festival two years ago and hit it off immediately.

“It’s all about the food, the fun and the friendship. Dean has become such a good friend that when he asked me to come up for the party I couldn’t say no,” said Lilly. 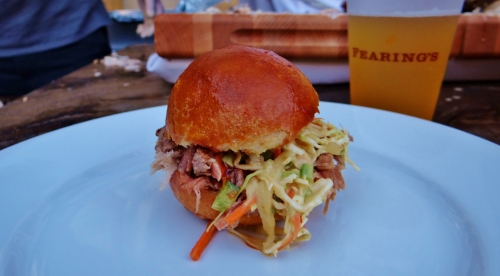 Guests were also plied with beer supplied by local brewers, Deep Ellum Brewing Company, who were out in full force serving up their Farm House Wit and their Rye Pils(ner).

Swirling about the restaurant were server offering Chris Lilly’s grilled oysters, but had to wait for pulled pork sliders, brisket and chicken.

The evening was topped off with Fearing and band buddies belting out rock standards to an extremely happy crowd.

Next, two dinners anchored by famed TV chefs Michael Chiarello and Hubert Keller will celebrate five years of Fearing’s. On September 19, Food Network’s Emmy Award-winner Michael Chiarello will join Dean Fearing and his team as they celebrate the Napa Style of Chef Chiarello, while on October 4, Hubert Keller, acclaimed for restaurants including Fleur de Lys in San Francisco and for his master judge role on Bravo TV’s Top Chef series, will present a uniquely French-inspired evening at Fearing’s. 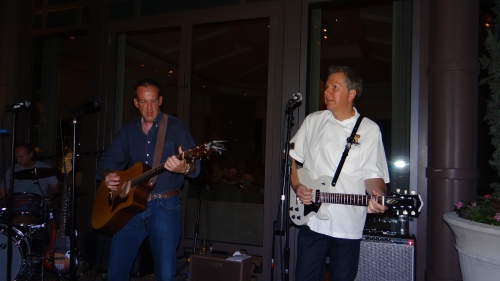 The Fearing’s Fifth Anniversary Series will culminate on October 19 with a special Dean’s Time Machine dinner, as menu highlights from throughout Chef Fearing’s culinary career will be presented by Fearing and by Houston celebrity chef Robert Del Grande of RDG/Bar Annie, to be followed by a musical performance of the Barbwires all-chef band.

Call 214-922-4817 to order your tickets for the remaining events. A portion of the proceeds for all events will go to a charity named by Chef Fearing.