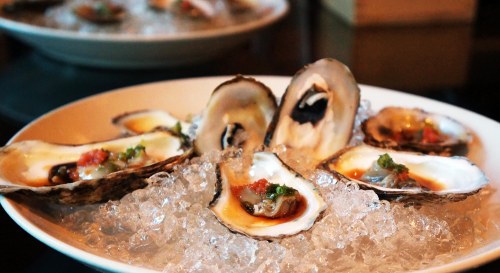 As 2013 swiftly moves into position, we took pause to review our photos from this past year selected some of our very favorite dishes, people and places. Looking back, 2012 was an excellent restaurant year for Dallas with many new openings that definitely elevated our palates. Innovators such as chef Matt McCallister are making Dallas a dining destination and will most assuredly be sought out with national culinary awards in the coming year.

This year brought us closer to the sea with forward thinkers such as Jon Alexis at TJ’s Seafood Market, Omar Flores at Driftwood, and John Tesar with his very new restaurant, Spoon. We also enjoyed a new rush of oysters in the Dallas area with the promise of even more in coming months. Look for the Establishment to open soon with 14 varieties on hand daily.

2013 should bring even more changes in the food community, but today we take you back to check out our list of favorites for 2012.

Café Momentum is the brainchild of Chad Houser and Janice Provost of Parigi. Houser took leave recently to work full time for the concept that assists in the development of our communities most at-risk children. Momentum works with the boys of the Youth Village Resources of Dallas to give them valuable life skills and a path to success. Each month the Café Momentum works towards the goal of being a brick and mortar restaurant by hosting a pop-up dinner at a different Dallas area restaurant. These pop-ups sell out in mere minutes.

Chefs for Farmers is the brainchild of Matt and Iris McCallister which started as a way to band a handful of chefs together and highlight local farmers and ranchers. This past year the event swelled to include a larger selection of chefs chaired by the three tenors of Dallas chefs, Stephan Pyles, Dean Fearing and Kent Rathbun with funds going to local farmers and charities. The event was held in the sweltering Dallas heat in May, but this not deter the happy crowds that read as the who’s who of Dallas culinary elite.

The lamb duo has undergone some changes since it was debuted at the grand opening of FT33, the beautiful new restaurant owned by Matt McCallister in the Dallas Design District. The dish is served with a pair of supple and crisped lamb breast wedges and a double lamb chop. The richness of the sweet lamb shines bright on this plate, and in a year of fantastic dishes this one stayed in our thoughts for the past several months.

Without a doubt this California chain changed the way we eat hot dogs in the Dallas area. These fantastic dogs are custom made for Jerry’s and they taste incredible. Made with a perfect bite, each dog can be dressed to your liking for no extra charge. 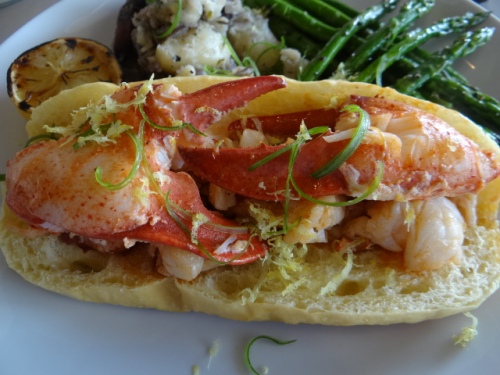 There were plenty of new lobster rolls offered up in Dallas this year, but the one roll that had us going back for more is at the new TJ’s located on Oak Lawn. The fresh, never frozen lobster is steamed the day you order your sandwich, and the chef uses the entire lobster to create this sandwich. There is no mayo used in this version, instead it is doused in a lemony butter mix that tastes much lighter and fresher. 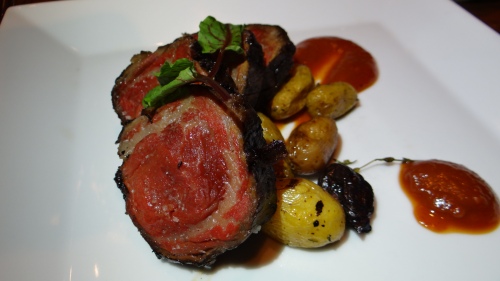 Many are mourning the loss of one of our best restaurants, Nana Grill which was located on the 27th floor of the Hilton Anatole Hotel, but the new steakhouse SER is doing a superb job of relieving some of that pain. The Wagyu Spinalis is actually one of the best cuts of beef available. This special cut is incised from the eye of the ribeye and served as medallions. The steak is about as tender as you will ever find. With just the right amount of rich fattiness that makes a steak so very supple.

John Tesar has been tearing it up at his new Preston Center restaurant, Spoon. Here the chef wrangles the very best seafood flown in fresh daily and given Tesar’s elegant touch. There is no doubt that seafood is Tesar’s long suit, and the man is knocking it out of the park each night.

Nathan Tate hits his stride at his new Bishop Arts restaurant, creating his homage to a proper French Bistro. The brunch has more of a New American feel about it, and without a doubt the best offering is the Legs and Eggs dish that combines two perfectly cooked duck eggs that are perched atop grit cakes and served with duck confit for a beautiful marriage on a plate. A happy nod also goes out to Tate’s version of oeufs en meurette. 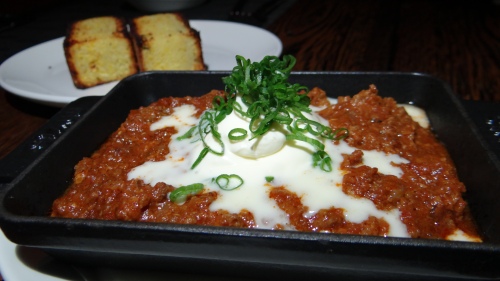 Chili is actually very difficult to find in Dallas, but Graham Dodds version is about as perfect as a bowl of red can get. Rich and meaty this chili represents everything that is good about the dish.

Chef  Laurent Poupart’s artichoke is nothing short of breath-taking. Since trying this amazingly refreshing dish we have gone back for seconds, and thirds. The large lump crab is sweet and fresh with a kiss of the ceviche treatment You will want this artichoke to cool you off when it’s 105 degrees outside.

The Do It Murph-Style burger at Off-Site is a superb example of burger goodness.  Made with roasted jalapenos and bacon relish, the burger sings. Add a fried egg for a half a buck more; you won’t regret this one.

This very new food truck hit the seen just weeks before the end of 2012 selling vegetarian and vegan dosas through out the Dallas area. The crepe-like Southern Indian street food is filled with potatoes and other veggies then served with 3 sauces that make each bite very special. 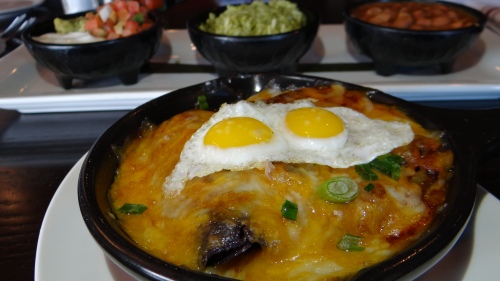 Served in a round, hot dish, these enchiladas arrive at the table bubbling. Order beef or chicken wrapped in a blue corn tortilla. For an added zing ask for the fried egg topping. These enchiladas come with the fresh roasted chile treatment for an extra boost of flavor of New Mexico.

The most recent Neapolitan-style pizzeria to achieve the VPN certification in Dallas, Dough makes lighter-than-air pizza topping with amazing ingredients. Here you will also find a fantastic burrata bar  that is made fresh each day in house. The Fontina pizza is pretty special and is topped with fontina cheese, oak-roasted mushrooms and caramelized onions and Reggiano for a sophisticated flavor bump.

Most Fun Dish of 2012: Spicy Meatball Shooters at Da Lat

This fun shooter is made with Vietnamese meatballs that are seared and sunk into a spicy broth of sake, coconut and cream.  Fair warning, the shooters are addictive and meant to be slurped up with ease. These will slightly remind you of Kent Rathbun’s lobster shooters.

JW Tate is raising the bar with his no nonsense style of cocktailing. You will find him each night serving up drinks at his family’s tavern, Tate’s. Although the bar implements all of its own mixers made in house, including the cola, these drinks are made swiftly and easily by Tate. In a year with an amazing rise in talent in the cocktail arena, Dallas has made major strides as one of the leading cities to find a well-made drink.

An air of whimsy is a major ingredient for a pastry chef, and Bates defines that word perfectly. The talented young pastry chef comes to the table with an amazing track record that includes stints at The Mansion, Dragonfly and Craft. Her pastries are playful and inspired. This past summer when we were all melting under the extreme Dallas heat, Bates created a dish made up her own push-up pops in blackberry yogurt, strawberry basil and raspberry flavors.  These were served with a summer berry pudding cake topped with fresh strawberry jam, home-made granola and a champagne sabayone.

Filed under Best of 2012, Steven Doyle