Tesar Gives You A Knuckle Sandwich For Lunch 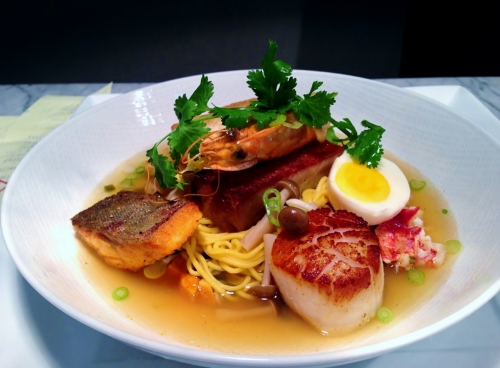 I know we recently chatted up the lunch service at Spoon Bar and Kitchen, but after a visit this afternoon just before the rains drifted in and out of the area I relished with a few friends at the beautiful little restaurant in Preston Center.

There were a few items I needed to taste, and one I wolf a full portion. The last time I was in was for a media tasting and one of my table mates ordered the ramen, so I went in a different direction. As we discussed at our table today, there can be no wrong orders since everything is perfectly delicious. But I wanted a whole bowl of that ramen.

It is the beginning of soft shell crab season, and last year Tesar made the best I had in town at his now shuttered Commissary. I spotted two on the luncheon menu. One was an appetizer, the other fashioned into a hifalutin’ taco. A quagmire ensued.

Luckily half the table went for the knuckle sandwich. This was a homage to the Commissary pork belly sandwich I raved about so much when that joint was open. Tesar said he had me in mind when he made the sandwich (I am sure it was some sort of Jedi mind trick). The sandwich is made with few giant shards of pork belly aligned with chunks of lobster knuckle meat. This isn’t the pretty part of the lobster used in other dishes such as the ramen, but it is still lobster and still delicious. 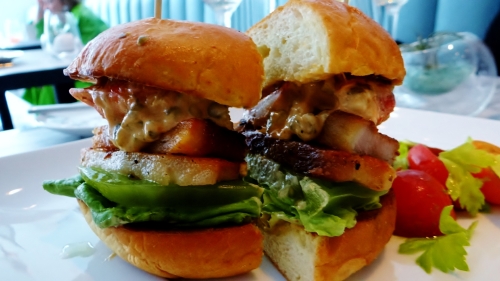 We sampled several crudos which are made for five people, or could be a nice lunch for a light appetite. We tasted the geoduck which was elegant and packed full of clammy sweetness. We also had the Yellowtail which had a smattering of heirloom tomatoes and pressed watermelon cubes. Then we jumped aboard a special which was made of razor clams topped with caviar.

We paired the crudos with an amazing wine from Cart Blanche. The 2010 Chardonnay is rich and spirited and paired oh so well with the crudos. The special oak barrels used to push the wines into bliss shined bright with each bite of our dishes. This wine is made in uber small case lots and only a few select spots in town stock this juice. Look for the label at Spoon, the Mansion, Fearing’s and Cedar Social. I will more than likely do a special piece with a representative from Nicholas Allen, the winemaker, in the very near future. It is that good.

I ended up with the ramen, and we had two knuckle sandwiches at the table along with one giant soft shell taco.

Later I found out that Tesar has a special line of soft shells that are always enormous, and always flown in fresh from the East Coast. Go with what Ben Stiller said as David Starsky, “do it”.

Lunches are brilliant at Spoon. The crowd is not enormous, and it is a perfect way to sample much of the menu without having to bust open a safe. It is lingering and light, which will play perfect for the warmer weather that is about to bust our noggins.

4 responses to “Tesar Gives You A Knuckle Sandwich For Lunch”