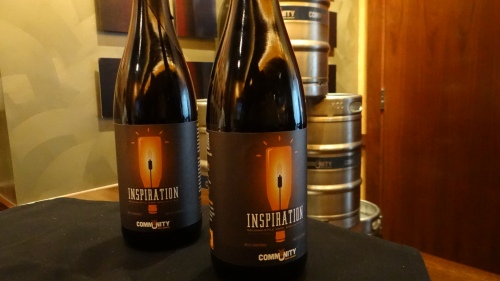 Earlier in the week Community Beer Company announced the release of their first two bottled beers at Del Frisco Grille. Both are hand bottled in the 750ml. We enjoyed both the heady Inspiration Ale and the Trinity Tripel which are award winning  Belgian-style beers.

“It has been an exciting 8 months of keg-only offerings since our opening in January 2013,” said Kevin Carr, founder of Community Beer Company. “And in that time, we’ve released a total of 9 beers, won 6 awards, and had a lot of fun being a part of the craft beer movement in North Texas. We are excited to release two of our Belgian-style beers for the first time in bottle format. By bottle-conditioning Inspiration and Trinity Tripel, we are able to bring out the complexities of these incredible beers otherwise not possible in keg format.” 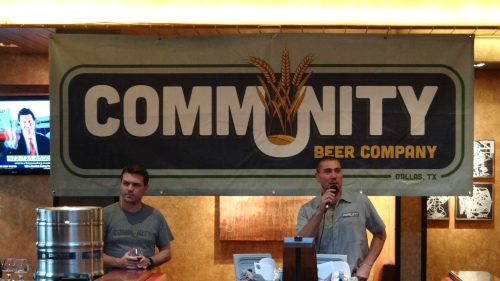 Inspiration Ale, a dark Belgian Strong Ale, offers a fruity aroma and rich malt character that balances out the high alcohol content. Trinity Tripel, a Belgian Pale Strong Ale, offers complex, yet balanced flavors with a slight citrus aroma. In the tradition of many great Belgian-style beers, the Community Beer Company bottle-conditions these beers in large format bottles by introducing live yeasts before capping in order to naturally carbonate the beer to give them richer flavor with a more effervescent mouthfeel.