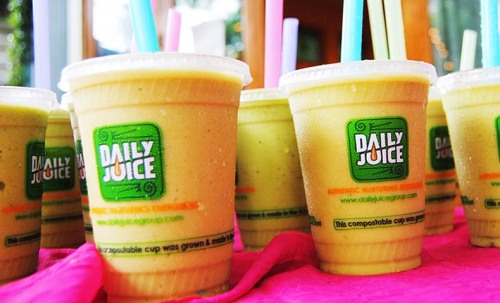 Daily Juice Café, an organic juice and smoothie café chain based in Austin, Texas, has signed an area developer agreement with DJG-DFW Holdings, LLC, an affiliate of Fort Worth-based restaurant operator Winslow’s Partners, LLC, to open a total of 10 locations within the next three years in the greater Dallas-Fort Worth area. Daily Juice will debut its first store in March 2014 in the Oaklawn area of Dallas at 3908 Cedar Springs Road, and a total of three locations will open in the market by summer 2014.

Daily Juice serves made-to-order organic juices and smoothies prepared from fresh vegetables, fruits and super foods, as well as highly nutritious grab-and-go foods in a quick-service, uniquely cultural environment. It’s the only concept in its segment that offers 100 percent real foods that are gluten- and dairy-free.

A space has been leased for the first Daily Juice Café in Dallas and it is slated to open in March 2014. Two more Dallas locations will be open by summer 2014. After there are plans to expand into Fort Worth and then the Dallas-Fort Worth suburbs, including Arlington and Plano, within two years. In total, 10 Daily Juice locations by 2016.