Last Sunday we checked out the special Copper River Fall Coho dinner at TJ’s Seafood Market on Oak Lawn. The dinner had several aspects to it that made is superbly desirable. First, there was plenty Alaskan salmon courses offered, five in total, all specially prepare by TJ’s chef, Scott Hoffner. We also enjoyed hearing about the conservation efforts in Alaska that benefits the Copper River Watershed Project, and thew river that runs directly through the entirety of Alaska. The Project supports the salmon based cultures, communities and economies in the region.

We were especially excited to meet the Copper River Watershed Project’s Executive Director Kristin Carpenter who spoke about the various aspects of her work. Her husband is a fisherman and she explained how the economy is affected by the catch, and the importance of the Project to keep the fish healthy and free of human contaminants.

TJ’s owner, Jon Alexis was busy running the plates during both sold out seatings, and was beaming to discuss the Watershed efforts. Alexis also donated his proceeds to CRWP, and encouraged diners to become supporting members, which costs $100.

It was a spectacular evening of thoughtful dining that had the guests delighted down to the last course. The salmon was prepared four ways to highlight the versatility of the fish. We were served salmon poached, pan-seared, grilled and house-smoked. The cold smoke is TJ’s specialty, but each course was a delicious as the next.  Copper River salmon is currently available at both of the markets in Dallas. You can make a donation to the cause by checking out the Project’s website. 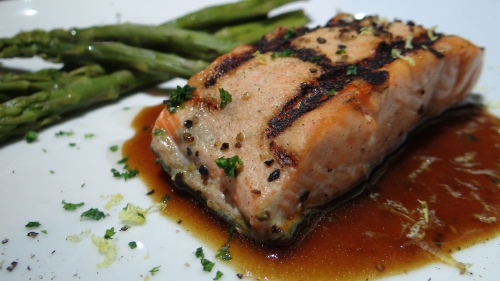