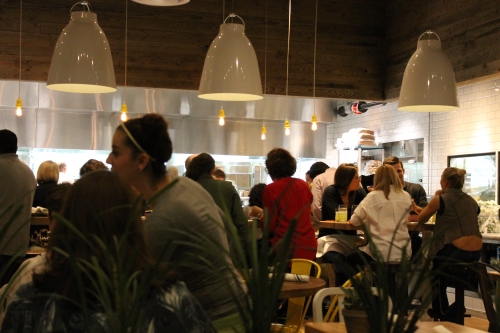 It was only a preview event tonight, but it already looks like a foregone conclusion that True Food Kitchen is going to have that “death star” impact that you might more usually associate with a Pappas or Badovinus opening. This, the first Texas outpost of a seven unit chain (5 in Arizona, 1 in Denver) from Fox Restaurant Concepts is the flagship for a major expansion in the state. Everything has been scrutinized, checked, and double checked to make sure it works. Although tonight was only the third time that stoves in this kitchen had been fired up, and the place was slammed with media, trade people, foodies and contributors to Café Momentum, their were remarkably few hiccups. Sure, a bit of a delay at peak time, but no big deal.

This is a slick operation and that will be solved. Speaking of Café Momentum, a delighted Chad Houser (executive director of the organization) wants to say thank you to attendees for the over $2,000 that you contributed to the organization’s work. He still won’t tell me where their permanent restaurant will open, but I get the distinct impression that it is RSN (real-soon-now). Apparently, lots of generous Dallasites are realizing that the recidivism rate among your offenders is 50%. But, put them through Café Momentum, and it drops to 15%. 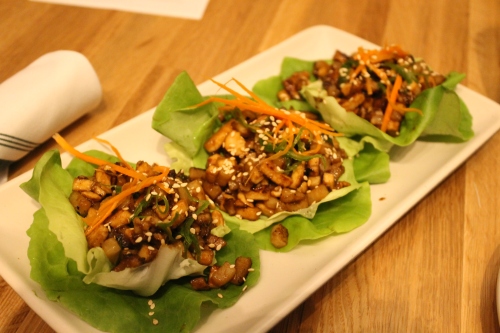 But what is True Food Kitchen? Think Whiskey Cake with less of a bar emphasis; think Seasons 52 with less formality; think the teaching of Dr. Andrew Weil (a paid advisor)  This is healthy food. Made on premises food. Food that can be flagged on the menu as gluten free, vegetarian or vegan; beer and wine that can be flagged on the menu as sustainably farmed, organic or local. What you won’t find here is a stonking good steak or a serious understanding of local when it comes to Texas wine (no Texas Viognier or Roussanne – the two best grapes in the state. Or a Tempranillo, the best red). But if Fox plans to establish a serious presence in Texas, they can fix this. Beer aficionados will find Rahr and Deep Ellum Brewing Company on the list. However, why not dump the Coors and Stella clogging the list? The quality of Dallas craft beer producers stands second to nobody. 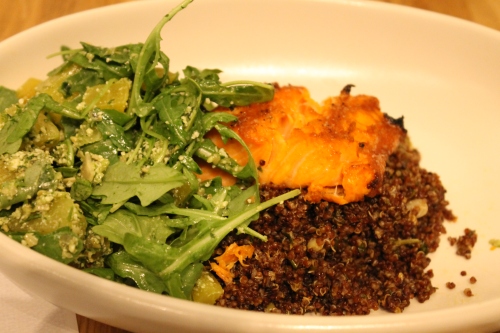 I don’t usually talk about the ‘space’, but I have to here. These premises are Green Restaurant Certified. To you and I that manifests itself as lots of wood (some reclaimed). The downside is a high noise level.  Check your chair: it is made from recycled soda bottles (Michael Jackson never looked so good). Your menu is printed on recycled paper.  These folks purify their own water in house. They make their own soda (and change the recipe every week — the current grape soda is Crave Recommended!). 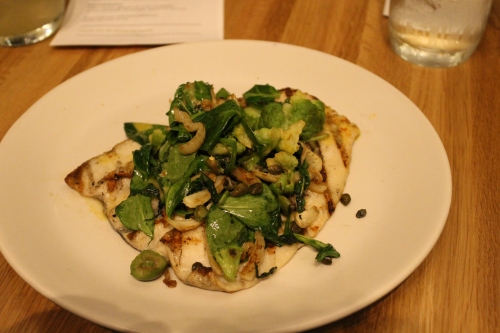 The food: I was there on execuchef Michael Sullivan’s second night. But everything tasted vibrantly authentic. The smoked onion quinoa was earthy and sweet. The roasted beet was al dente but reassuringly tart when bit in to. The steelhead salmon was cooked spot-on to deliver firm flesh and effusive flavors. A starter of Shiitake and Tofu Lettuce Cups was rich in a soy sauce but kept the fleshy texture and earthy flavor of the mushroom. Grilled Rainbow Trout is a recommended dish, but tell me when you order it: is that green cauliflower looking thing broccolini? Tasted great, It’s just that the NSA hadn’t got the chef’s emails to me by the time I tasted it.

Setup: We liked the row of tables at the back of the main room for their views. There is also what PC-obsessed publications would call a ‘communal table’ in front of the open kitchen. I would call it the chick bar, based on the fact that 85% of the occupants were (rather beautiful) ladies.

The bottom line is that True Food Kitchen has the concept and attention to detail to do well and we expect them to stick around.