To make it to the final showdown, 12 finalists had to prove they were the best of the best on the local, regional and divisional level by ousting over 8,000 bartenders from over 900 TGI Fridays restaurants in more than 60 countries around the world. In the final competition, each bartender exhibited product, ingredient and recipe expertise through a series of rigorous tests followed by a freestyle performance, where a panel of judges assessed each finalist’s ability to make innovative drinks while displaying both an engaging style of service and flawless mixology techniques. Think Tom Cruise in Cocktail.

“It is such an honor to be chosen as the World’s Greatest Bartender by Fridays—a brand with such a legacy of great bars and bartenders,” said Hool.  “I’m incredibly proud of this honor and thrilled to represent Fridays as the World Bartender Champion. I can’t wait to celebrate with my Fridays family and guests in Canton.”

The 12 finalists in this year’s World Bartender Championship hail from five countries. The top competitors who reached the finals include:

The local favorite was the spunky Katie Livzey from McKinney, Texas who had the crowd roaring with her flawless execution and flair. 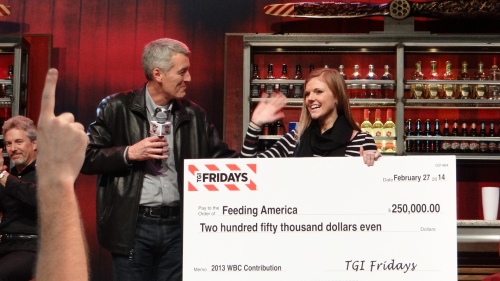 The journey and efforts of the 12 finalists culminated in last night’s event, and Fridays will donate all proceeds raised from the local, regional and division bartender competitions to Feeding America, the nation’s leading domestic hunger-relief charity. Fridays is dedicated to hunger-relief and is committed to educating the public about food insecurity.