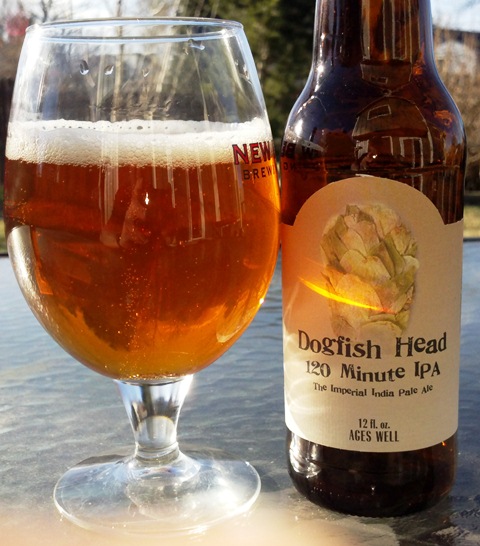 Dogfish Head Brewery is a brewing company based in Milton, Delaware founded by Sam Calagione, and opened in 1995 producing 175,000 barrels annually. Dogfish is known for their in your face brews with a touch of insanity involved, such as their  “Liquor de Malt”, a bottle-conditioned malt liquor, which typically comes in a Dogfish Head brown paper bag. Many f the beers are extreme in alcohol, reaching 18-20% ABV, where your average brews clock in from 3 to 7%.

Dogfish Head’s most popular beer can be found in the line of India Pale Ales (IPAs), which are available in three varieties: 60 Minute, 90 Minute, and 120 Minute IPA. The names refer to the length of the boil time of the wort in which the hops are continuously added. The longer hops are boiled the more bitterness is imparted to the beer. That certain bitterness is sought out by those that appreciate a good IPA.

The 60 Minute is described by the company as “a session IPA brewed with Warrior, Amarillo and Simcoe” and is readily available year round, and rates a 6% ABV.  The 90 Minute is the oldest IPA offered by Dogfish, and is a continuously hopped imperial IPA with a great malt backbone that stands up to the extreme hopping rate, and is a powerful 9% ABV.

The Dogfish that is sought out the most is the very elusive and most hoppy 120 Minute, which originally was a 21% ABV beer, nothing sessional about that.  Later the 120 was later lowered to a safer average rating of 18%.  The beer is released February, June, and October each year since its first brew back in 2003.

You may sample the 120 Tuesday, April 29 stating at 6:30pm in Plano at Holy Grail. They will also be tapping other brews from Dogfish, including ApriHop, Immort Ale, and Burton Baton.