A Chop Off The Old Block

In early May I reported on a steakhouse in downtown Dallas that flew under the radar in terms of its innovative approach to the toughest restaurant genre in Dallas — the steakhouse. Recall, we sent out-of-towners Smith & Wollensky, Flemings and BLT Steak packing. Even the spellingly challenged were not saved. N9Ne showed that it had exactly one, and not n9ne lives, in Dallas’s ghost town, Victory Park. My find, Dallas Chop House had innovative steak cuts, sides that deserved first-tier status, and preparation that was skillful and consistent. The Dallas Chop House gang, DRG concepts, spun off a baby brother in the form of Chop House Burger (CHB), which quickly gained a following of its own in its Main Street location near the mother ship. DRGs plan was always to go multi-site (although not through franchising, which, says manager Nafees Alam, is where concepts ‘go to die’).

I just got back from a media event to celebrate the opening of the second site of Chop House Burger. Intriguingly, they took a risk by opening it in a suburb, Euless, where the demographic is very different from downtown Dallas. After two months business, they report that Euless has welcomed them with open arms. That means good lunchtime crowds and busy evenings during the week. Heavy traffic all day at weekends, starting with kiddie soccer teams on Saturday morning and churchgoers on Sunday lunchtime. Since they serve beer and wine (including Deep Ellum Brewing Co. local beers) they get a strong adult crowd as well. During the World Cup, two televisions will offer game-by-game coverage.

What accounts for the popularity is the concept and its execution. Chop House Burger is a burger joint where you won’t be forced to eat tasteless grey meat cooked in advance and coated with a yellow pus euphemistically named cheese, but might comes from a can. The cooked-to-order burgers start at $5.95 for the Chop House Burger which comes with black summer truffle sauce, shaved red onion, vine-ripened tomato and green leaf lettuce. The patty is Certified Angus Beef. It is served on a brioche bun hand shaped by Empire Baking Company. The tomatoes come from Village Farms in Marfa and the lettuce from Tassione Farms in Stephenville.

A range of burgers include a Buffalo Burger ($6.95) for those seeking lean meat and a Wine Country Burger ($7.95) made with Texas’ Olson Cattle Company beef (no hormones, antibiotics or steroids) and goat cheese. The Olson meat and the Certified Angus both had intense meaty flavor and were both cooked the medium-rare that I requested (CHB recommends medium out of an abundance of caution but I find that too high a temperature for the sinewy texture and raw meat flavor that I like). For vegetarians, a Green Burger ($6.95) is made of falafel and comes, optionally, with tzatziki. A Chicken Fried Chicken burger ($6.95) uses crisp fried all-natural free range chicken breast, shaved red onion, vine ripened tomato, green leaf lettuce and white peppercorn gravy.

A chopped salad ($4.95) adds a vegetarian dimension (you can add meat, in the form of the burger patties, if you wish). You might even fancy the Homemade Texas Chili ($4.50) featuring Certified Angus Beef. Undoubtedly, my favorite side was the Truffle Parmesan French Fries ($3.25), a witches brew of truffle oil, Parmesan cheese and chopped parsley coating bootlace fries that puts Graham Dodds thrice-cooked fries at risk of being usurped as best in town. 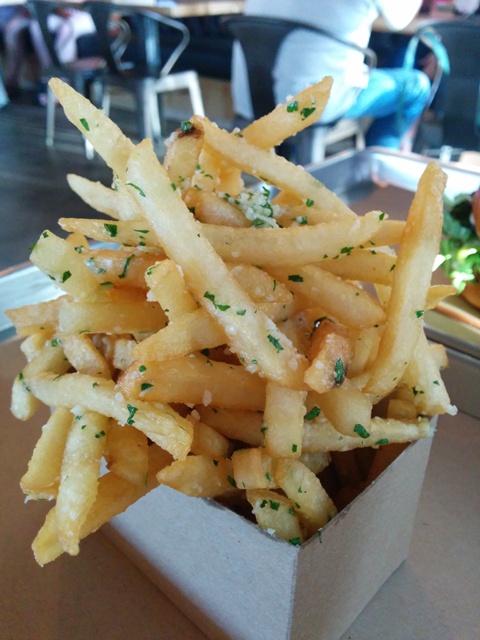 Also memorable are the shakes. Unlike the mass-market variations (or lack of variation) of chocolate, vanilla and strawberry featuring questionable amounts of chocolate, vanilla and strawberry and based around sugar-infused plastic, CHB shakes are made with milk and ice cream (Henry’s ice-cream from Plano, to be precise). The “Frenchie” ($4.50) is vanilla ice cream, Madagascar vanilla bean, scalded cream and crushed caramel. It’s an ethereal combination. Almost as good is the Italian Nut Job ($5.50) assembled with vanilla ice cream, Nutella and hazelnut. All five shake recipes are creative breaks from the status quo and developed by corporate chef A.J. Joglekar (chef A.J. to everybody) in a collaborative environment in which every employee from server to CEO participates in tastings and gives feedback.

CHB has followed its corporate bedfellow, Dallas Chop House, in living a somewhat under-the-radar existence. This is a pity as more people would be happy if they knew about it If you seek a high quality burger made with exemplary transparency regarding the provenance of the ingredients, and a strong candidate for best burger in town, then CHB is worth checking out. That will get easier over the rest of the year as they expand to Fort Worth, Plano, Frisco and Southlake.

One response to “A Chop Off The Old Block”