We made the rounds last night and our first stop was to visit with chef-owner Ricardo Avila at his restaurant Mextopia. We have heard about, even written about his bacon happy hour, but hadn’t actually stopped in for the bacon-fest that he hosts each Thursday and Saturday. Last night we stopped in for a visit, and a beer, and bacon.

The happy hour is exactly as you might imagine. You order a beer and they bring you this lovely dish of bacon. We were told that Avila douses the bacon with brown sugar for a lifting flavor. The bacon is thick, hearty and some of the best we have had.

When you visit Mextopia you may be swayed by the heavy construction, but don’t be. Avila is doing a great bit of business despite the lack of an actual street in front of his doorway. Avila said that the construction will continue through out the remainder of the year. 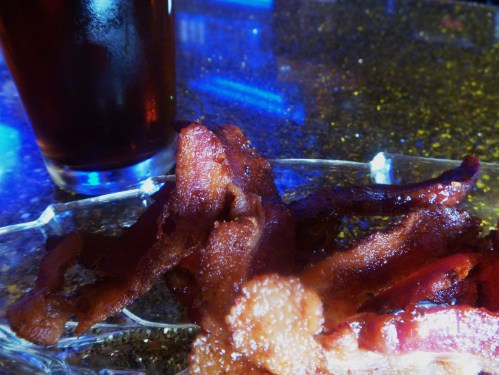 We also asked about the food court park that is being constructed across the street. This is the site of the old Arcadia building which burned down in 2006 and has since been razed to make way for the park that will include six food trailers, an electric car charging station, a playground and picnic tables.

The park will feature Airstream trailers permanently installed, leasing the spots to local restaurants with Jason Boso of Twisted Root being the first to sign up.  Avila said that they will soon begin construction on the park.