Beer continues to pour  freely through the streets of Dallas and we have a bit of news that should prove interesting to those that enjoy a good craft beer.

The guys at Union Bear finally received their brewing equipment and worked on their first batch of home grown this weekend. The guys made a Belgium Pale Ale that will make its debut in about three weeks. We will keep you posted on that bit of news. In the mean time they are hatching new ideas for some crazy good beers and even crazier names.

Deep Ellum Brewing Company continues to the be bad boy of beer in Dallas and you can sample on some of their finest in several places this week, including the world headquarters for the beer located in in Deep Ellum. 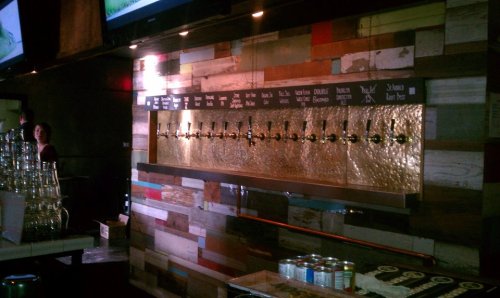 The first spot you might want to enjoy one of Deep Ellum’s finest is at a beer dinner tonight at The Common Table. Although a sell-out, it was just announced a few spots opened up for the swift and determined. The dinner includes five Deep Ellum brews, and four courses for an even $50.

There will also be a tap take-over at Goodfriend Beer Garden and Burger House this Wednesday that will include Rye Pils, the very new Farmhouse Wit, Double Brown Stout, Deep Ellum IPA and wait for it…. the very last keg of Dreamcrusher. Plus, as an added bonus, they have a dry-hopped cask of IPA.

You can still gain access into the first beer dinner at Gin Mill tomorrow (Tuesday April 24, 2012)for their  Band of Brewers event that includes seven beers, all national except for our local boys Deep Ellum. This is a true beer bargain that includes dinner for $30.

If you didn’t get your fill of Deep Ellum brews you can stop in for their first ever Thursday Night  Beer Tours that ill feature a band and food from BuzzBrews.  The admission price is a lowly ten bucks.  The brewery is located in Deep Ellum in case you were wondering.

Elsewhere in Texas you can catch more beer action. Texas BeerFest is running in Houston this weekend.  Also in Waco enjoy Texas Craft Beer Festival at the Dancing Bear Pub where they will feature plenty of beers from around our state and offer growlers in a silent auction. This event starts at 3pm Friday April 27, 2012.