Meet the King And Queen of Louisiana Seafood

Chef Keith Frentz owner of Lola in Covington was crowned King of Louisiana Seafood today after winning the 5th annual Louisiana Seafood Cook-Off presented by the  Louisiana Seafood Promotion and Marketing Board. Ten chefs from across Louisiana vied for the coveted title and it was Frentz, assisted by his wife Chef Nealy Frentz, who impressed the judges the most with his Tabasco-spiced Friday Lunch Special, a cornmeal-dusted wild Des Allemands catfish, Camellia red bean and local crawfish succotash, braised collards, and house made tartar sauce. 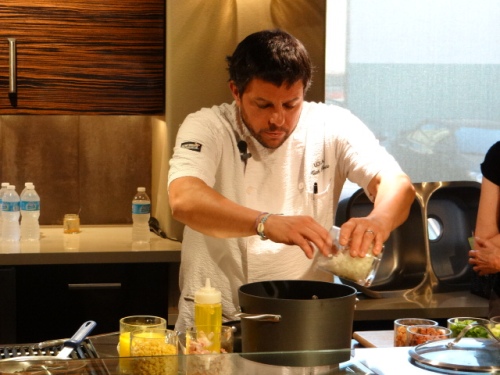 The pair of chefs were in Dallas last evening to help promote both Louisiana seafood and tourism. We had a chance to bend their ears for a few minutes.

Tell us about your restaurant, Lola.

Nealy: We opened Lola in 2006. It is in downtown Covington which is in St. Tammany Perish. We are in the old train depot and our kitchen is actually in the caboose.

Tell us about the cuisine. We have heard great things.

Keith: I guess for a lack of better words it would be called Louisiana contemporary. We utilize all the area farmers markets, fresh gulf seafood, and everything is made from scratch at the restaurant for the best possible flavor.

What is your culinary background?

What’s this competition you won?

Keith: We won the Louisiana Seafood Cook Off with the dish we made today. We first won the state seafood competition and then went on to represent the state in a national competition which we came in second place.

So you are the Seafood King?

Keith: We are the King and Queen of Louisiana Seafood. That means we will represent the great state of Louisiana and talk about the amazing seafood our state has to offer.

When we come to Covington to visit your restaurant where should we stay?

Nealy: There are plenty of great bed and breakfast’s in Covington, but our favorite is just down the street from Lola and is called the Camellia House. It is owned by a really nice couple that have supported us since we opened. It is very homey and they make you feel welcome.