Recap of the Chefs for Farmers Sous Chef Competition (Video)

Last Sunday we enjoyed another chapter in the Chefs for Farmers series. The Sous Chef Competition is the latest to come from the team assembled by Iris and Matt McCallister who started the organization that pays homage to local farmers and ranchers, and their supporters. Each CFF event is different than the next, which I am sure gives the organizers a bit of brain strain, but their efforts pay out brilliantly. 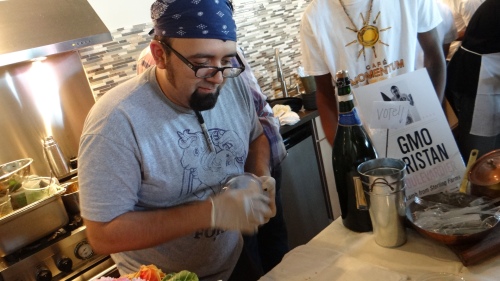 The Sous Chef Competition was held at 3015 in the new Trinity Groves area of West Dallas and featured a pack of talented sports that were competing for a bit of booty and the top honors of a rising chef in our community.

The competition was strong but the winner rose to the top with his playful dish. GMO Tristan created his plate consisting of a Moroccan glazed lamb loin on a bed of roasted carrot hummus, with a North African salad of fried garbanzo beans, cumin almonds, preserved lemons, drunken raisins, and peas drizzled with lemon confit. The young chef is offering the dish for sale in the form of a small plate at Boulevardier through Saturday evening.

The event also paid tribute to a handful of early adopters in the Dallas area who live and breathe the farm to table movement. Those chosen were chef Randall Copeland, who passed earlier this year and was the owner of Restaurant Ava, Kaci and Robert Lyford from Patina Green in McKinney, Lucian LaBarba from Fresh Point, Nanci Taylor from Edible Dallas Fort Worth Magazine, chef Graham Doods from Central 214, Bradon and Susan Pollard from Texas Honey Bee Guild, and chef Sharon Hage.

The list seemed large, but Iris McCallister said the list could have been much greater as Dallas has so many who are taking up the charge of supporting local farmers and ranchers.

We snapped a few photos consisting largely of chefs who were at the event and made a little fun video. The next event will be held this November 3, 2013.