Pecan Lodge To Open May 23 With Growlers, BBQ and Fun

For those sitting in wait for Pecan Lodge 2.0 to open in Deep Ellum, set your clocks for 7pm May 23rd. This is when the public will be able to sample the amazing brisket, sausages, ribs (both pork and beef) along with all the other fantastic things that has made the BBQ joint so legendary. The new digs are spectacular, and befit the vision that owners Diane and Justin Fourton have been furiously developing for the past year.

With news of the opening, and a preview for friends and media, there were some terrific announcements made last night. The first is that Pecan Lodge will now be selling growlers of beer. And to top off the brew news Four Corners Brewing Company came up with a new beer in their line up called The Boss Lady, which is named after Diane Fourton. The new beer, called Rustic Red, is actually a spin off of the brewing company’s American amber, Red Roja, that has been dry hopped for a special piquant flavoring backed with notes of stone fruit and citrus. 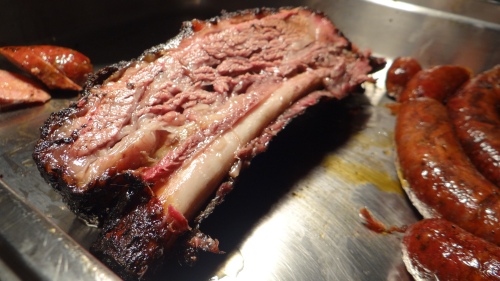 Over the past months Pecan Lodge has been working with the folks at the Wine Poste to develop a perfect wine list to pair with BBQ. For those that have attended the occasional Friday night BBQ in the Design District, you have already sampled a foreshadowing of that very list.

Last minute arrangements were made for last night’s coming out party. Diane Fourton thanked friends Tiffany Derry and her husband Mark Mitchell who spent the previous evening assembling chairs and hanging photos at the new nearly 5,000 square foot facility. Other friends of he Fourton’s lined the crowd including many in the industry including Jay Jerrier, Chad Houser and his wife Kristen, Brian and Courtney Luscher and many more. The media was out in full paparrazi force as well, sending flashes at break neck speeds as the Fourton’s unveiled their new location.

You will enjoy the new space which is located at 2702 Main Street in Deep Ellum. Be sure to bring your growler, or purchase one of the Pecan Lodge versions lining the wall of the tiny gift shop which also offers tee-shirts and other BBQ memorabilia.