One of the most exciting aspects of my job at Crave is witnessing the talents of our city’s many talented chefs. Matt McCallister is certainly high on that list. The boyish grin McCallister shot me after completing his collaborative FT33 dinner this past Monday with his San Antonio counterpart, Jason Dady, told me that he had a marvelous time in the kitchen. And the many who attended the special dinner had an equally delightful evening as they applauded the two young chefs as they exited the kitchen and thanked the group for being part of a great food city such as Dallas.

Throughout the evening the pair of chefs would on occasion pop out and explain that they had both foraged and shopped in their respective city’s. There would be things on our plates that we as civilians might mow over or disregard as superfluous weeds. But to our hosts they were found booty in the form of ramps, stinging nettle, lovage and even remnants of McCallister’s Christmas tree.

I have personally witnessed McCallister create a powdered brown butter, not too unlike the garnish on our plated dessert Jason Dady created. It is a marvel to witness. But in the same dish he added a tobacco nougat. Seriously delicious.

James Beard nominated Dady is a serious chef who seemingly enjoys is time in his variety of San Antonio kitchens, including Umai Mi Modern Asain Fare, Tre Trattoria in Alamo Heights, Tre Trattoria Downtown in the Fairmount Hotel, Two Bros. BBQ Market, and The DUK Truck, a food truck with a rotating menu. Dady made mention that he is from Dallas, and the night was a bit of a homecoming for him. Dady is certainly welcome back any time he pleases.

We want to share the fare for the evening with you, and you will most likely not want to miss future editions of FT33’s guest chef series.

Carolina gold rice, ramps, green tomato, and fermented strawberry from the McCallister side 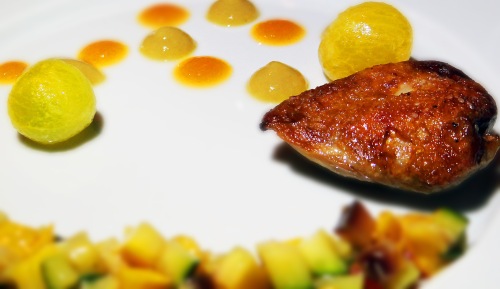 Black bass, squash, grilled onions, oregeno and lovage (McCallister has this on his new menu) 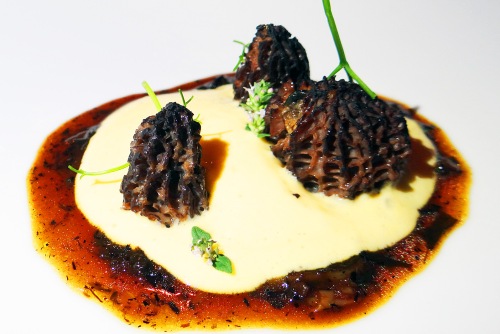