An Evening At Pakpao With Chef Jet Tila 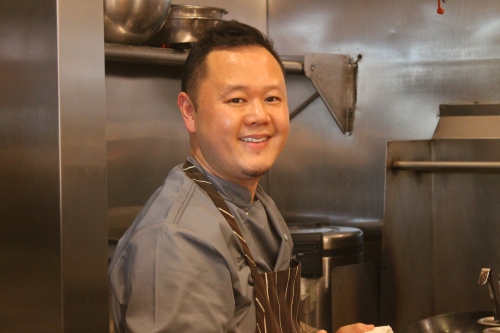 Have you eaten at Pakpao, the edgy Thai restaurant in Dallas Design District? If so, forget everything you know. Go back, and if you haven’t been, go. They have a new menu and a new chef in an unusual arrangement.

They have just entered an agreement with the man who may be the most famous Thai chef in the country, Jet Tila. He, of Cutthroat Kitchen, Iron Chef (he narrowly lost to Masaharu Morimoto), No Reservations, half a dozen other shows on the likes of Food Network, plus a restaurant empire that stretches across the country, is now an equity partner in Pakpao with Richard and Tiffany Ellman and their Apheleia Restaurant Group (Pakpao, Oak, and Belly and Trumpet). The intriguing thing, for me, is that he said in 2014 that “I am interested in creating concepts, not just one-offs”. Does that mean that Pakpao, to become a two-off with the opening of an offshoot in Plano this summer, is destined to become a national chain? The P.F. Chang’s (the 49th largest restaurant chain in the U.S. by sales, $930M, in 2011) of Thai food? Only time will tell. 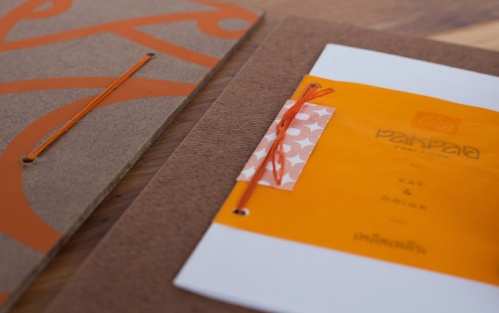 At a media event on a perfect warm spring evening, the food veered away from the food of the opening chef, Eddy Thretipthuangsin, to a style that reflects chef Tila. The new menu (to be unveiled today) is a work in progress, so I don’t know how much of the old menu will hold over. We sampled dishes exclusively from the new menu. 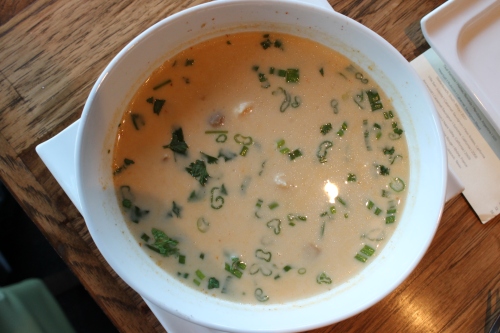 The star of the evening also happened to be part of the opening duo. Chicken Coconut Soup (Tom Kha Gai), $6 cup/$12 bowl, is a rich broth of poached chicken, lemongrass, kaffir lime leaf, galangal, mushroom and coconut milk. That is the chemistry, but the sensual experience is much more experiential as the acid from lime and lemongrass maintains a liveliness to the sweet, creamy flavor of the coconut milk. Add to that whole porcini mushrooms and strips of white chicken meat and this soup has texture and complex flavors as well (so long as you dodge the rings of lemongrass. For its Michelin star, Pakpao will have to filter these out). 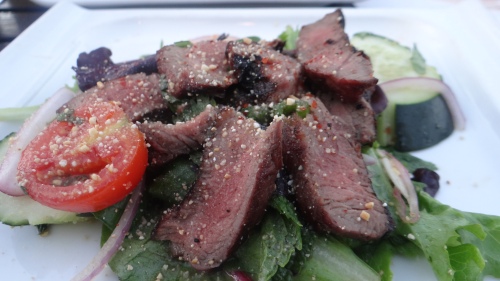 The other salad on the menu, Waterfall Steak Salad (Neau Nam Tok), $11, assembled familiar  ingredients (cucumber, red onion and roasted rice) with strips of marinated steak, bird’s eye chili for punch and something called “yum dressing” which, contrary to being the trade secret that I anticipated, is actually a bona fide dressing whose recipe exists in the literature. The key components are coconut flakes for flavor and texture, and fish sauce for flavor. 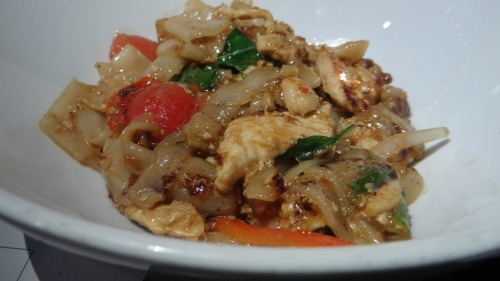 Drunken Noodles (Pad Kee Mow), $12, was notable and may be a stand in for the ubiquitous pad Thai. Even on your first encounter its chicken, onions, noodles and tomatoes combine to give this dish the reassuring feel of comfort food. You choose the protein, so this could come with shrimp ($15) or crab ($28) as well as a tofu version ($12). 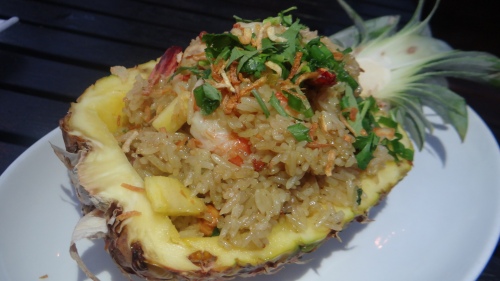 The photogenic presentation award goes to the simple, yet creative, Pineapple Fried Rice (Khao Pad Sapparod) $15, which used a hollowed out pineapple half for the fried rice dish that is obligatory on many Thai and Chinese menus. The filling of Chinese sausage, shrimp, the eked-out pineapple and roasted cashews was a tasty combination.

Buried down the end of the tasting menu, but not buried from my memories was Chiang Mai Curry Noodles (Khao Soi), $15, a deeply satisfying curry dish with diversions. The generous use of cilantro and crispy spring onion garnish modulated the velvet texture of the coconut milk. The house smartly kept all this light enough to be easy to finish, even with braised beef in the ingredients.

Pakpao has a few signature cocktails. Check out the prickly pear margarita for starters. The wine list is brief (just under fifty selections), priced at just under 3x retail and could do with some work. There is no Alsacian Gewürtztraminer, despite its affinity for asian food, no southern French whites, and the Darioush Viognier (brought over from the Belly and Trumpet list) at $94 could yield to Brennan Vineyards Viognier, a hit with sommeliers and less than half the price. Pakpao was out of the first two wines by the glass that I ordered, which exposed the paucity of just nine white by-the-glass elections. Rather than make the patron pick something that is of a vastly different character, why not offer to open a similar wine from the bottle selection as a substitute by-the-glass wine?

The room is elegant and airy. Noise levels ran at about 89dB on Decibel Meter when packed. The front patio is raised just enough above street level to suggest exclusivity. Parking is easy in the evening and valet is available.

Will it clone? The Plano site will provide some answers to that. Will Tila move his base of operations to Dallas, leaving Sriracha as the only private employer in California five years from now? Will the consulting arrangement with Tila work out? Time will tell. He is a very busy man. In the meantime, Pakpao deserves a visit by all Thai food lovers, even those who have been before.

One response to “An Evening At Pakpao With Chef Jet Tila”