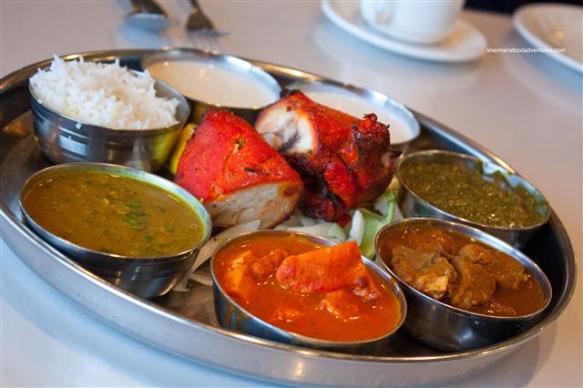 India’s cuisine is as rich and diverse as her people. The spectrum of Indian cuisine can be said to lie between two dietary extremes: vegetarianism and meat-eating. India is well-known for its tradition of vegetarianism which has a history spanning more than two millennia. However, this was not always the case.

As India has been the crossroads of many people and cultures over centuries, foreign elements have invariably seeped into its culinary culture, sometimes displacing or modifying local cuisines. The invasion brought changes in many aspects of everyday life in India, including the palates of the Indian people which became tempered by a foreign taste.

Styles of eating differed between the Hindus and the Muslims. In contrast to the Muslims, the Hindus usually take their meals individually, a feature that may have developed as a result of rules regulating eating practices across castes.

According to many estimates, the Indian subcontinent has more variety in food than the whole of Europe put together. This is because of India’s extraordinary ability to assimilate foreign things and produce something new from it.

There is no such thing as a single ‘Indian’ cuisine. Almost all regions of India have their own tradition of food, although they can be grouped into 3 main categories.

Wheat is the staple constituent of many North Indian foods, while rice is the important thing in Southern and Eastern foods. Most famous in all traditional food is Gujrathi Thali & Punjabi Dishes

The staples of Indian cuisine are rice, atta (a special type of whole-wheat flour) and at least five dozen varieties of pulses, the most important of which are chana (bengal gram; similar to the chick pea but smaller and more flavorful), toor (pigeon pea or red gram), urad (black gram) and mung (green gram). Pulses are used almost exclusively in the form of dal, except chana, which is often cooked whole for breakfast and is processed into flour (besan). 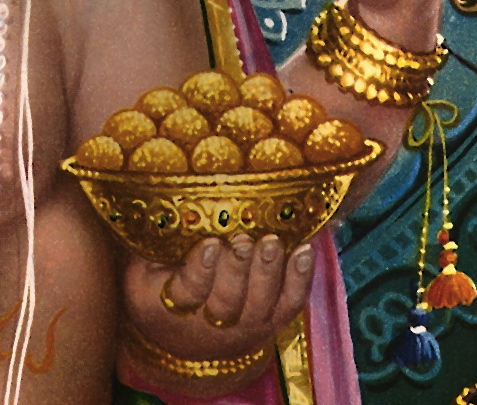 India is one of the few countries in the world that can boast of people from different backgrounds and different religions living together and enjoying and celebrating festivals of each other with the same enthusiasm as they celebrate their own. These different religions provide India with a lot of different festivals that are celebrated all year long. As a matter of fact some people say that India is a country where a festival is celebrated everyday.

Modakas of fresh coconut, regional varieties of murukku, laddu and kajjaya are thought to be favorites of Ganesh and are offered on Ganesh Chaturthi. 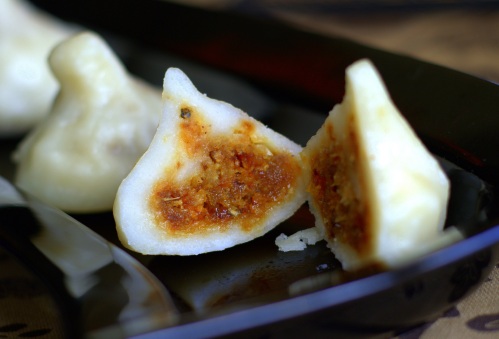 Ingredients:
1 cup fine, fresh Rice flour
1 cup water
¼ tsp salt
2 tsp oil
Method:  First make the Stuffing. Put the Coconut and jaggery in a heavy bottom pan and cook on medium flame, stiriing in between. Cook till the jaggery melts and the mixture becomes homogenous.  Add the roasted poppy seeds and cook for few more minutes. Remove from heat and allow it to cool.

Now make the rice flour cover. The cover has to be made a bit carefully. So keep aside all your other jobs and take 1 cup water in a pan and boil it. Once it boils add salt and oil to it.  Add the rice flour immediately with one hand and stirring the mixture continuously with the other. Take care that no lumps are formed in the mixture.Cover for 1-2 minutes. Remove the dough on a flat surface and knead well with your hands while still hot…You can apply a little oil  to your hands to avoid the dough from sticking.

This is a very important step. You have to knead the dough properly to avoid the cover from cracking. Now take a small lemon sized ball from the dough and keep the remaining dough covered with a cotton cloth in the pan. The remaining dough should not be allowed to cool. This is where extra help is welcome.

Flatten the small ball shaped dough with both your hands like a puri. Don’t make it too thin. Now hold the flat dough in your left hand and add the coconut stuffing. Apply little oil to your right hand and pinch the edges of the flattened dough at 4-5

Bring them together to join them at the centre of the Modak.  Shape resembles that of garlic bulb from top (I am not supposed to say garlic, especially since the Modaks are made for God, but I couldn’t find any other analogy!

Repeat this process for the remaining dough and make more Modaks before the dough cools down. If you are alone you can guess how fast you have to make it.

After all the Modaks have been made steam them. Take a steel sieve. Grease it with oil. Keep the Modaks one by one in it taking care that they do not stick to each other.

Keep this sieve on a steamer (You can use a deep vessel with 1/3rd water.) Cover the Modaks and cook for about 12-13 minutes.

Congrats. You have just made one of the most delicious, traditional Maharashtrian Sweet.

Top each hot steaming Modak with Ghee generously (You will need the ghee after all the hard work.) Offer them to God, and don’t waste any time putting the entire Modak in your mouth… blissful isn’t it…Worth the effort? Of course it is! 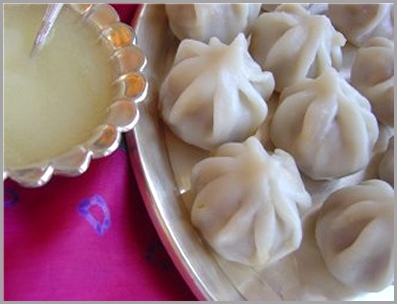 Steam-cakes, which are prepared from a fermented batter of rice and urad dal (gram). Soak rice and gram in water for about 12 hours, then grind the stuff to a watery paste. Place the paste into plates that contain small compartments with tiny holes under them, then cook in a pressure-cooker. 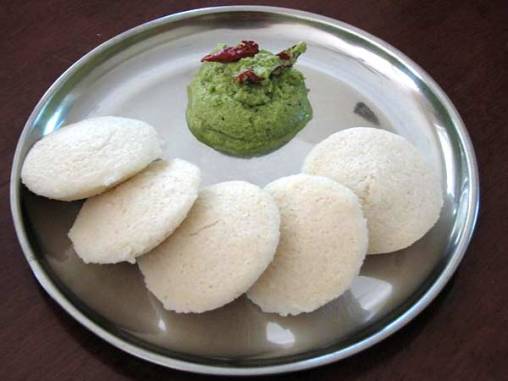 Steam-cakes, which are prepared from a fermented batter of rice and urad dal (gram). Soak rice and gram in water for about 12 hours, then grind the stuff to a watery paste. Place the paste into plates that contain small compartments with tiny holes under them, then cook in a pressure-cooker. Idlis are very tasty when eaten with chutney or sambhar as a side-dish. 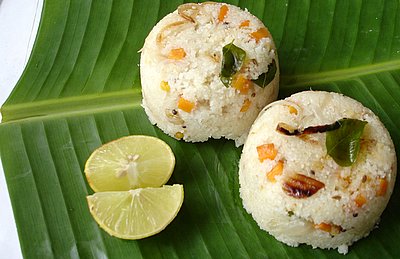 Made from wheat (rava) and vegetables. It is partly fried and boiled along with the cut vegetables and spices added.

There are several Indian bread known by various names such as roti prata, thosai and naan bread. 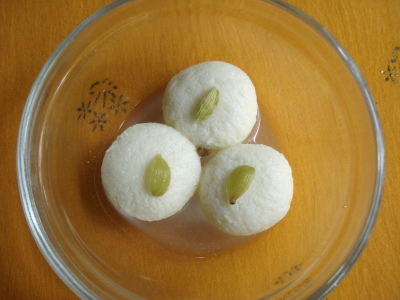 Britain has a particularly strong tradition of Indian cuisine that originates from the British Raj. At this time there were a few Indian restaurants in the richer parts of London that catered for British officers returning from their duties in India.

In the 20th century there was a second phase in the development of Anglo-Indian cuisine, as families from countries such as Bangladesh migrated to London to look for work. Some of the earliest such restaurants were opened in Brick Lane in the East End of London, a place that is still famous for this type of cuisine. 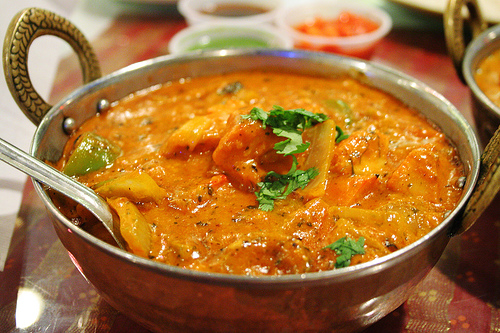 In the 1960s, a number of inauthentic “Indian” foods were developed, including the infamous “chicken tikka masala”. This tendency has now been reversed, with sub-continental restaurants being more willing to serve authentic Indian, Bangladeshi and Pakistani food, and to show their regional variations.

This is original content prepared especially for craveDFW as part of a cultural exchange from a friend of ours born and living in India. In the coming weeks we will show you where to find each of the particular styles of food mentioned above in Dallas. We will also be discussing the best options for shopping for ingredients for those wishing to experiment with this cuisine at home, and have some cookbooks to recommend as well. Enjoy!.

Tagged as Dallas, Indian Food, Primer, What Am I Eating?

One response to “Indian Food Culture and Choices: A Primer”