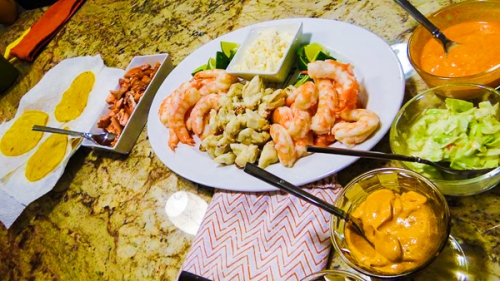 I am often asked since I dine out so frequently if I ever cook at home. The answer is yes, and I am quite capable. But the fact is I dine out nearly every meal, and I do miss cooking at home. But as fortune would have it I had a chance to do just that when a friend invited me over this week.  But I cheated a bit by stopping in at TJ’s Seafood Market for a little assistance.

I dropped by the TJ’s for a little friendly advice from my favorite fishmonger, Jon Alexis. Alexis suggested for light bites to grab some jumbo shrimp that they prepare fresh each day, and maybe a bit of their signature smoked salmon and large lump crab. This sounded perfect for an evening of wine and conversation, and decided to make tacos out of all the ingredients. Little was I aware but these would be the best tacos that mankind has ever known, I humbly submit. 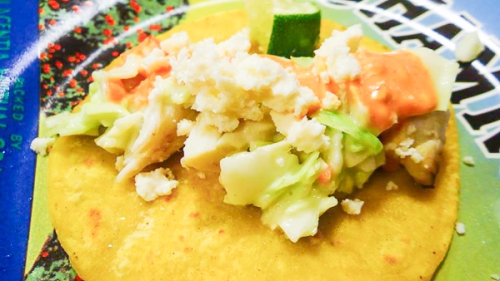 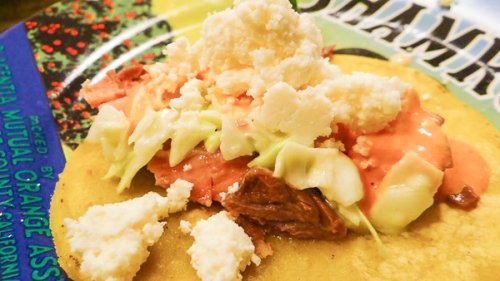 I thought to pick up a few TJ’s sauces they make in house as well, and this proved fortuitous. One of the sauces was a wasabi vinaigrette which I would later use to make a slaw to top the tacos. The slaw had a sweet crunch with a heady bite of flavor from the wasabi.

So here is the breakdown of taco night. With a quick pan fry of the smallish corn tortillas (smaller are cuter), we started building our tacos. First add the crab, or smoked salmon, then layer a spot of the wasabi slaw, topped with a drizzle of homemade sriracha mayonnaise, and finish with crumbles of queso fresco. The slaw worked perfectly adding an interesting element of taste, and the spicy mayo brought the heat.

The choice between the smoked salmon and the sweet large lump crab was difficult, so we ate plenty of both. The flavors worked well together, and you could get the full enjoyment of the proteins.

I had happy dining companions. The tacos were a hit, along with some well-chosen shards of cheese, and some terrific wine. Thank you Mr. Alexis for your genius suggestions. Now if we could only get TJ’s to add the crave taco to the menu.