Where My Ladies At? 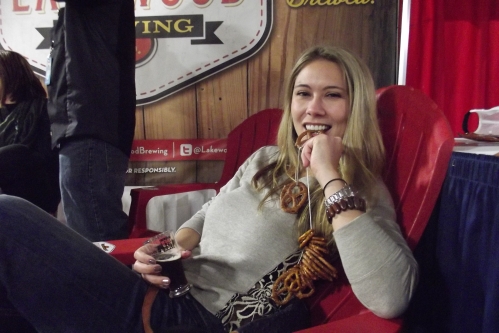 No, seriously, where are you? I’m relatively new to the beer scene, but it doesn’t take a certified Cicerone to be able to notice the lack of female flavor in this batch. Craft beer is an overwhelmingly male-dominated industry. It doesn’t really make sense, does it? Aren’t we expected to stay in the kitchen, anyway? It seems like women and brewing should be a perfect fit. Oddly enough, there is truth to that statement; women were actually known as being the original brewers, sorry, I mean brewsters, the female counter-part to ‘brewer’ (how cute is that?!).

The history, no, herstory, the herstory of brewing actually began four thousand years ago in Mesopotamia with the Ancient Sumerians. Women were the only ones allowed to brew beer. They even had three female deities to watch over the whole process: Ninkasi, “the lady who fills the mouth”, and Siris were both Goddesses who would watch over the daily ritual of brewing, and there was Siduri, who was a very wise alewife, or brewster, from the epic Gilgamesh. Not only did Siris know her shit when it came to beer, she was also full of wisdom, which she imparted onto Gilgamesh.

The brewing process would be controlled by women for the next several thousand years. Finnish legend says that a woman by the name of Kalevatar is responsible for beer coming to Earth by mixing honey and bear saliva. It is widely accepted that the female influence in beer in early history was because many women were tavern owners, and assumed the responsibility of brewing their own beer, or housewives, who would add brewing beer to their list of day-to-day homemaking. Thomas Jefferson, the guy credited with being one of the original homebrewers? Nope. It was pretty much all Martha. 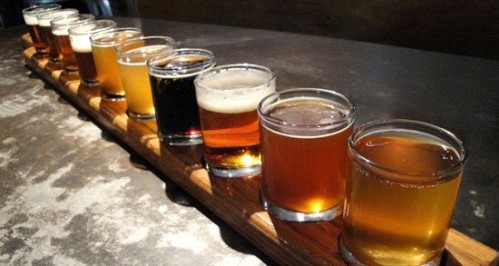 It wasn’t until the Industrial Revolution where we see a drastic decrease in female brewers. The theory is that as men were no longer needed for agriculture, and jumped at the chance to work in the lucrative, booming beer industry as industry itself began to blossom. Laws were changed and made it difficult for women to continue in their role is brewmasters; it became required for all female tavern owners, with the exception of widows, for their license be in their husband’s name. As punishment also became harsher, the husband would then be required to take any lashings that were sentenced to the wife. Because, you know, women can’t take a punch, or more recently, drink beer, like a man, evidently.

Fast forward to present day, where companies rhyming with Schmudweiser, created the marketing precedent set for beer drinkers. We’ve all seen those commercials with the guy being sold an ice cold beer from a stereotypically “hot” girl. More recently, as big beer companies realize that women are, like, equal or something, they’ve started designing beers specifically made and marketed for women, describing them as low-calorie or super light in flavor, or introducing pink or fruity, sweet beers. Paraphrasing Teri Fahrendorf, founder of the Pink Boots Society, an international organization created to empower women looking to become beer professionals, men who want to drink beer are probably already drinking beer, but women who want to drink beer aren’t because they don’t know how or where to begin. While I am but a lowly server compared to the geniuses behind the bar, it’s disheartening when a customer says to me, “Just ask your bartender for his favorite stout.” Guess what guy, I never asked the bartender. You’re drinking MY favorite stout.

There does seem to be light at the end of the tunnel. Craft beer has opened up the world that was once ours, ladies. Craft beer companies don’t typically market their beer towards one gender or another, they just try to put out good beer and hope people buy it. In doing research about the lack of female presence in the beer community, I found out that of the near one hundred and fifty individual facilities in Colorado, only ten women are involved in the brewing process. That being said, I also found that all-female, or mostly female, breweries are beginning to pop up more and more frequently. It began picking up again for women back in 1950, when a man with the surname Spoetzl (Shiner Bock, anyone?), passed away, and his daughter, Cecilie, became the first female brewery owner in the United States. Now?

Cool things are happening. FemAle is a group in Sweden with all female members and began as a way for women to get together and talk about craft beer, but then turned into their release of We Can Do It, a bottled pale ale. New Belgium, one of the largest craft breweries in the United States, has the only female CEO of a brewery. Way to go, Kim Jordon, who is also one of New Belgium’s founders. Denizens Brewing Company in Maryland is predominantly female, 4 out of 6 of their team being women. Virginia’s Port City Brewing is home to Allison Lang, a brewer and beer scientist (and former biochemist, another field sadly lacking the ladies). And more close to home, we have Independence Brewing in Austin, which has a husband/wife duo at its helm. Even more close to home, Bearded Eel in north Fort Worth also have a husband and wife team as its founders/brewers.

We still have a long way to go, it was nearly impossible trying to find more than 10 female brewers, but I’m very excited about the changes we’ve been seeing lately in the craft beer community, if only because I get to be surprised by the adventure of female beer drinkers fairly regularly. I’m guilty of stereotyping, I’ll admit it. I’ll go drop off another table’s drinks to a man and a woman, one beer being a super light and sweet American Wheat Ale, the other being a super bitter West Coast style IPA, and guess what? I almost always assume the light, sweet one is for the lady, and the hop-packed one is for the dude. I love it when I’m wrong. I’m ready for this next chapter for women in craft beer; I think we all are. As I mentioned previously, women have long been involved with beer, subsequently, if anything, we’ve come full circle. So, gentlemen, do yourselves a favor and let your lady take you out for a beer once in a while. I promise we’re more than just a pretty face, and capable of doing (and drinking) pretty much anything you are.

Mallory Turner is the beer guzzling girl your momma warned you about. You will find her at LUCK in Trinity Groves.

One response to “Where My Ladies At?”